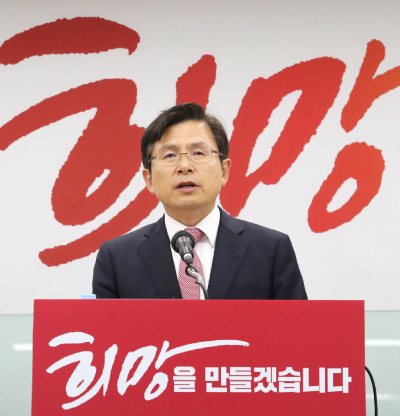 Hwang Kyo-ahn, chairman of the Liberty Korea Party, holds a press conference at the National Assembly in Yeouido, western Seoul, on Monday. [YONHAP]

The chairman of the main opposition Liberty Korea Party (LKP) announced Monday he’d launch a committee on economic policy by the end of this month to “drastically transform” the Korean economy and save it from the Moon Jae-in administration.

Chairman Hwang Kyo-ahn relayed the plan during a press conference at the National Assembly in Yeouido, western Seoul, while officially ending his three-week hiatus of parliamentary activities to tour the nation to hold anti-Moon rallies.

Hwang made a dramatic departure from Yeouido earlier this month for what he said would be a long journey across the country to canvass public opinion on Moon’s statecraft.

Hwang didn’t say exactly when the committee would launch, but mentioned that it will be directly under his supervision and include members from all walks of life and social backgrounds, including economic pundits, women and young adults.

“The Moon Jae-in government’s leftist economic tyranny is crushing Korea and the lives of its people,” Hwang said Monday during the press conference.

The committee, according to Hwang, will come up with an economic vision for the nation - and urge the Moon government to follow through on it.

Hwang, who served as prime minister in the former conservative Park Geun-hye government, also took a jab at the Korean Confederation of Trade Unions, one of Korea’s two largest labor unions, saying it was “destroying the economy” by blocking labor reforms.

On the fine dust issue, Hwang said his party would seek cooperative projects with China to reduce fine dust pollution blowing into Korea.

Of the weirs from the controversial four-rivers restoration project that the government wants to scrap, Hwang vowed to block authorities from taking them down no matter what. The project was a signature policy of the former conservative Lee Myung-bak administration.

The Environment Ministry announced in February that three weirs will be demolished, and the LKP has accused the Moon government of playing politics to make conservatives look bad.

When asked during Monday’s press conference whether he had any intention of meeting Lee Hae-chan, chairman of the ruling Democratic Party (DP), to discuss normalizing the functioning of the National Assembly, Hwang replied there was no reason not to if Lee is sincere about reviving the economy for the people’s sake.

The LKP has been boycotting parliamentary activities since the DP formed an alliance with three other minor opposition parties to fast-track bills on political and judicial reform late last month. The LKP has been urging the DP to revoke the bills.