Korea gets first win at U-20 World Cup

Korea gets first win at U-20 World Cup 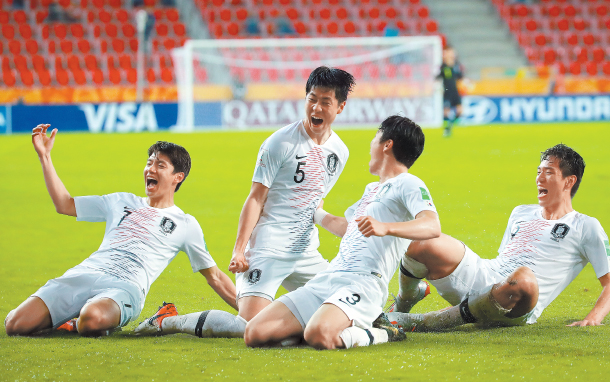 The U-20 Korean national football team celebrates after Kim Hyun-woo, second from left, scores a goal during a Group F match against South Africa at Tychy Stadium in Tychy, Poland, on Tuesday. [YONHAP]

Korea’s U-20 national football team picked up their first win at the 2019 U-20 FIFA World Cup by defeating South Africa 1-0 at Tychy Stadium in Poland on Tuesday.

Led by head coach Chung Jung-yong, Korea took to the pitch with a more aggressive 4-2-3-1 formation. Playing the first half in heavy rain, the two teams struggled to score. Although South Africa continuously made attempts on goal, goalkeeper Lee Gwang-yeon stayed strong in front of the net and Korea was able to finish the first half without conceding.

Korea then started to make its comeback in the second half. In the 69th minute, Kim Hyun-woo finally broke the silence by scoring a header, allowing Korea to walk away with three points.

“I sensed that the pendulum would swing our way and the South African players were running on fumes,” Chung was quoted as saying on Yonhap. “It would have been nice to have scored more goals. It would have helped us prepare for the next match with more confidence.”

Although Kim scored the winner, he credited his teammates with his success.

“Our forwards helped out a lot on defense, and other defenders played hard as well,” Kim was quoted as saying on Yonhap. “But I ended up getting all the spotlight. I feel bad about that and I am also grateful for my teammates.”

Normally, goalkeepers don’t get much attention, but following Korea’s match against South Africa, Lee received just as much praise as Kim. Throughout the match, South Africa had six shots on target while Korea only had three. Thanks to Lee, Korea was able to pick up the shutout win.

“I’d like to congratulate Gwang-yeon on a great game, and I think he can start playing with more confidence from now on,” Chung said. “I’ve always stressed the importance of having a strong goalkeeper in tournaments like this. And I think he played with much-improved focus today.”

As Korea lost its opening match to Portugal 0-1, Lee said he was more determined than ever to pick up a win against South Africa.

“I wanted to take it upon myself to deliver this win,” Lee said. “We had to win this game to advance. We were the desperate team.”

A win allowed Korea to be ranked second in Group F, behind Argentina. As Argentina defeated Portugal 2-0 and South Africa 5-2, they’ve already earned their spot in the knockout stage and will be the winner in Group F with six points.

Although Korea previously lost to Portugal, they are still ranked second in Group F as Korea is ahead of Portugal in goal difference. Since Korea and Portugal are fiercely competing for the runner-up spot in the group, Korea’s result in its last group match against Argentina is expected to be the biggest determinant in their advancement into the knockout stage.

The top two teams from each group automatically earn their spot in the knockout stage, while only four out of the six third-ranked teams will be given a spot.

Due to this, Korea will have to finish with at least a win and a draw to avoid an early exit. Even if Korea loses their last match against Argentina, they will have to try to give away as few goals as possible to be considered one of the four best third-ranked teams to be given a spot in the next stage.

“We’re prepared for that match [against Argentina],” Chung said. “And I don’t want to have to go through different scenarios and compare points with other teams. I just want the players to do the best they can in that one match and enjoy the experience.”

This year, the squad is competing under the slogan of “Again 1983.” The U-20 team’s best finish at the tournament was advancing to the semifinals during the 1983 FIFA U-29 World Cup in Mexico. In the 2017 U-20 FIFA World Cup, which was hosted in Korea, the squad successfully managed to advance to the knockout stage but faced an early elimination by losing to Portugal in the round of 16.

At this tournament, Argentina is considered one of the favorites to win the tournament as it’s been the most successful team by winning six titles. Regardless of their previous achievements, Argentina has proven to be a strong team as it is currently the only team in Group F to have earned a spot in the knockout stage. Interestingly, this is the first time since the 2011 event that Argentina will advance to the knockout stage.

Korea’s last group match will be against Argentina at Tychy Stadium in Poland on Friday at 8:30 p.m., 3:30 a.m. on Saturday, Korea time.