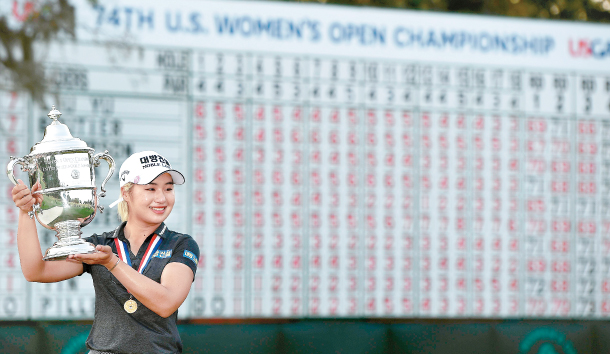 Lee Jeong-eun poses with the trophy after winning the U.S. Women’s Open at the Country Club of Charleston in South Carolina on Sunday. [GETTY IMAGES/YONHAP]

Lee Jeong-eun picked up her very first LPGA Tour title at one of the world’s most prestigious tournaments, the U.S. Women’s Open on Sunday.

By shooting one under par, 70, on the final day, Lee picked up a thrilling come-from-behind victory, finishing two shots ahead of the runners-up at the Country Club of Charleston, South Carolina.

Lee started the final round two shots behind the co-leaders at sixth, opening with a bogey, but quickly redeemed herself with a birdie on the par-4 second. Finishing her first nine holes at even par, Lee made her way up the leaderboard with back-to-back birdies on the par-3 11th and the par-4 12th. Then, by adding another birdie on the par-5 15th, Lee extended her lead by three shots.

Yet she started to struggle on the last three holes. She added a bogey by failing to hit the green in two on the par-4 16th. She then made another bogey on the par-4 18th to finish the tournament at six under par, 278. Throughout her round, Lee made four birdies and three bogeys.

Once Lee completed her round, she still had to wait for the final group to finish their round. Celine Boutier of France, who started the final round as co-leader, was closely chasing Lee until the last hole. On the par-3 17th, Boutier had a shot at tying the lead by sticking her tee shot, but as she missed her birdie putt, she headed into her final hole one shot down. Yet as Boutier made a double-bogey on the last hole, Lee was declared this year’s champion.

“I was able to hang on because I’d played well over the front nine,” Lee was quoted as saying on Yonhap. “My ball striking was sharp and I gave myself a lot of birdie opportunities.”

With the win, Lee took home the prize money of $1 million, the largest in tournament history and the second largest among LPGA Tour events, and continued Korean golfers’ dominance in majors this season. So far this season, Korean golfers have won both of the major tournaments that have been played - Ko Jin-young won the first major of the season, the ANA Inspiration back in April.

With Lee’s win, Korean golfers have won seven tournaments out of 13 competed this season. Looking at the Korean winners on the U.S. Women’s Open, she became the 10th Korean golfer to win.

Lee didn’t forget to thank her family for their support.

“I thought about wanting to play golf because I wanted to support my family no matter what,” Lee was quoted as saying on LPGA website. “And after I became like successful on the KLPGA for three years, thinking about that, this makes me want to play more and I wanted to [enjoy playing] in the tournament.”

Lee went on to win the KLPGA Rookie of the Year award in 2016 and reached even greater heights in 2017, capturing four titles en route to earning the Player of the Year honors.

Lee was a dominant player on the KLPGA Tour, where she won seven tournaments, and earned her full-time LPGA Tour status this season by winning the LPGA Tour’s qualifying tournament in November 2018.

From her impressive career on the KLPGA Tour, Lee was already ranked No. 20 in the world ranking before she started her season on the LPGA Tour. Before the season started, Lee was given a lot of attention as the most likely player to top the Rookie of the Year award.

And she lived up to expectations. In the nine tournaments Lee competed in this season, she had four top-10 finishes and has been very consistent with her performance, as tied for 26th was her worst finish.

Before the U.S. Women’s Open, she’d left quite an impression during the LPGA Mediheal Championship by finishing second. At the tournament Lee lost to Kim Sei-young in the playoff to finish tied for second.

“As a rookie player, I thought - I mean, I just wanted - I didn’t even expect to win the tournament this fast,” Lee was quoted as saying on GolfDigest. “I think this is very lucky that I won this major championship.”

“Six is a lucky number for me,” Lee was quoted as saying. “I remember winning a tournament in Korea after shooting a 66 in the third round, and I got my first LPGA title at six under.”

After she won the tournament, Lee even added “6” to her name on the U.S. Women’s Open trophy.