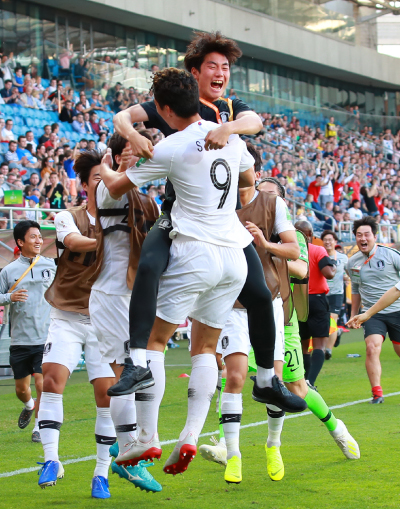 Korea’s U-20 football team celebrates after Oh Se-hun, wearing No. 9, scored a header during the round of 16 match against Japan at the 2019 FIFA U-20 World Cup at Lublin Stadium in Lublin, Poland, on Tuesday. [YONHAP]

Korea’s U-20 football team successfully advanced to the quarterfinals by defeating longtime rival Japan 1-0 at the FIFA U-20 World Cup at Lublin Stadium in Poland on Tuesday.

Starting the match with the same 3-5-2 formation that proved effective against Argentina during its last Group F match, Korea played defensively as it finished the first half 0-0.

Only five minutes into the second half, it seemed as if Japan had finally broken the silence with a volley from Yuta Goke, but it was quickly ruled offside with the Video Assistant Referee (VAR).

After nearly falling behind, Korea finally woke up. Playing more offensively throughout the second half, Oh Se-hun scored the first and only goal in the 84th minute with a header after receiving a cross from Choi Jun to lead Korea to the win.

Korea may have got the win, but Japan stayed on top of the ball throughout the game, ending with 61 percent possession. Despite that, Korea had four shots on target, while Japan only managed one.

“When [Choi] Jun sent the cross my way, I tried to do whatever I could to put my head on it,” Oh was quoted as saying on Yonhap. “Fortunately, it went in. I want to thank my teammates for not conceding a goal to that point and giving me that opportunity to score.”

Oh, the tallest player on Korea’s U-20 squad, has now scored two goals and is the leading scorer on the team. Standing at 1.93 meters (6 feet 4 inches), both of Oh’s goals so far have been headers.

“I didn’t expect myself to be leading the team in goals at this point,” Oh was quoted as saying. “It still hasn’t hit me yet. All I wanted to do was to help the team any way I can.”

This was the first time in 16 years, since 2003, that the teams have faced each other at the FIFA U-20 World Cup. The two faced each other in the round of 16 then as well, but Japan defeated Korea 2-1.

Korea’s win allowed the two teams to square their head-to-head record at FIFA U-20 World Cup at a win and a loss each, but looking at the two countries’ all-time head-to-head record in this age bracket, Korea is well ahead at 28 wins, nine draws and six losses.

Korea’s win has allowed the team to advance to the quarterfinals for the first time since 2013. This means that Korea is now one step closer to reaching its goal of “AGAIN 1983.” Before the tournament started, the U-20 team’s goal was to repeat the success of the 1983 FIFA U-20 World Cup, where it finished in the final four.

Korea has already done better than last tournament - in 2017, when the event was hosted in Korea, the team was eliminated in the first knockout stage by losing 1-0 to Portugal.

“We can’t be just talking about making the semifinals or the final,” Oh was quoted as saying. “We have to believe in ourselves. I think we can do it. Personally, I’ve developed confidence that I can play against anyone.”

With a win, Korea will face Senegal in the quarterfinals in Bielsko-Biala, Poland. Throughout the tournament, Senegal has yet to be defeated. Assigned in Group A, Senegal started the tournament by defeating Tahiti 3-0 and Colombia 2-0. Although it finished the group stage with a scoreless draw against Poland, it was still good enough for the team to finish first in Group A.

Senegal continued its stride against Nigeria, winning 2-1 in the round of 16.

As the U-20 team has a tough schedule with matches every four days, head coach Chung Jung-yong emphasized that it’s more important for the players to keep their energy high enough throughout the tournament, rather than tactics and strategies.

“Tactics and strategies aren’t as important now,” Chung was quoted as saying on Yonhap. “We just have to make sure the players have enough energy left to compete. It’s nice to have some confidence, but you still need to have some strength to actually play. Some have more left than others and we’ll try to figure out how to make the best use of those players.”

Korea’s quarterfinal match against Senegal will kick off at 8:30 p.m. on Saturday, or 3:30 a.m. Sunday, Korea time.