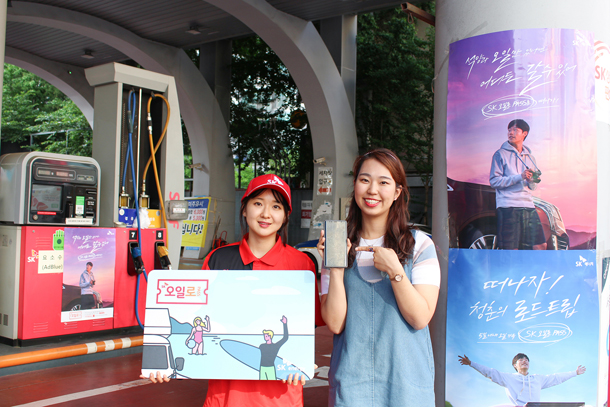 SK Energy’s SK Oilro Pass campaign, which began on June 5, has proven hugely popular among young people aged between 25 and 35.

Trending with hashtags such as #summervacation, #musthave and #RyuJunyeol, SK Oilro Pass ranked No. 1 on the real-time search ranking for people in their 20s on Naver on June 6. It also ranked in the top 10 for users in their 30s.

The SK Oilro Pass campaign is SK Energy’s travel project aimed at supporting young people aged between 25 and 35. SK Energy will provide 1,000 young people with a preloaded card containing 200,000 won ($170) that can be spent on gas to allow them to travel for five days without worrying about the cost of moving around.

As of June 11, the number of people who have applied hit 137,000, already an unusually high number for a participatory event. It is thought that the message of support for young people has struck a chord with many exhausted young Koreans in desperate need of a vacation.

During the application process, people can create images of customized Oilro Pass coupons to share on their Instagram feeds, adding to the hype.

“I applied for the SK Oilro Pass with my friends after seeing it on my other friends’ Instagram feeds,” said a 27-year-old man. “I want to make great memories of my twenties through this trip.”

Ryu Jun-yeol, an actor and model who appeared in the ads for the SK Oilro Pass, also contributed to the scheme’s popularity because he perfectly represents the youthful values the project embodies. Ryu’s brand also fits the cool advertising video.

Winners can refuel at 3,600 SK gas stations nationwide from July 15 to August 31 for five days from the date of first use.

“We are so happy that young people are showing even more happiness and excitement than we expected,” said an official from SK energy. “SK gas stations will become a symbol of young and happy energy for young people.”

You can apply for the Oilro Pass at sk-oilro.co.kr until June 25.