Cats are the true stars of Korean YouTube: Relatively new as pets locally, viewers are eager to learn more

Cats are the true stars of Korean YouTube: Relatively new as pets locally, viewers are eager to learn more 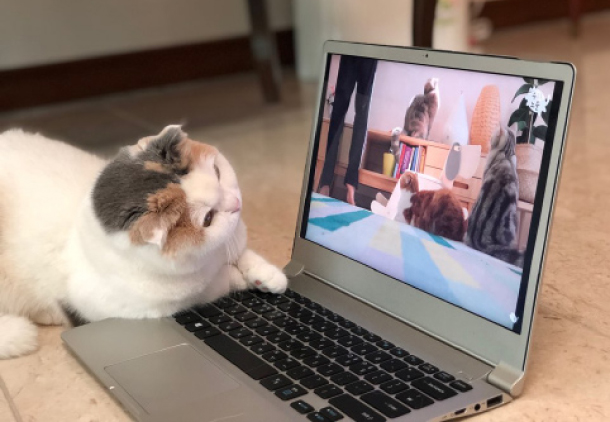 Surpassing the 100-million-subscriber mark is an achievement that few Korean YouTube channels can boast. Even popular celebrities struggle to attract large audiences because of the fickle nature of viewers who only click the “Subscribe” button when they know the channel will suit their interests.

Would you believe that channels that upload nothing but videos featuring cats have significantly more subscribers than the channels of most popular celebrities?

The two popular channels are only a few of many channels dedicated to cats that are springing up left, right and center.

The operators of these channels are known as “butlers” - a term that many cat owners use to refer to themselves because they try to “serve” their pets. These butlers try out various activities and film their cats’ responses, which are often unpredictable.

On SuriNoel, the butler films ordinary moments living with his five feline friends, such as giving them food and baths, or just cuddling with one another. On Cream Heroes, the butler entertains her seven cats with various activities, such as cooking treats for them and filming their reactions.

Although there are dog channels on YouTube, surprisingly, none of them have over one million subscribers, like the popular cat channels. The most popular dog channel, Girl’s Planet, currently has 780,000 subscribers.

“The primary reason [for their popularity] is due to the sharp increase of one person households,” explained Han Dong-wook, a vet at Seongsim Clinic in southern Seoul. “Cats are more independent than dogs, not as loud, cleaner and basically they don’t require as much care [as dogs]. Dogs, on the other hand, bark, bite and are more active, so cats may be more adequate for people living alone in a single room or apartment.”

“Fundamentally, the [ongoing] cat phase is also part of a global trend, which stemmed from United States, Japan, and eventually spread to Korea,” said Han.

“I think there is also the fact that cats are considered more mysterious animals compared to dogs,” said veterinarian Kim Myung-chul, the chief doctor at Baeksan Animal Hospital, which specializes in cats, in southern Seoul. “Cats are still relatively unknown, so people are curious. Moreover, images of cats online and in the media have shifted toward showing more cats being cute, creating a positive image for people and breaking the stereotypes that they are snooty or disloyal.”

Although some haven’t hit the one-million-subscriber-mark, other popular cat channels are proving to be hits, such as Mejoo and Cats, which has close to 400,000 subscribers and features the life of a married couple living peacefully with their four cats. My Pet Diary, with 350,000 followers, shows the life of a couple in the United States with their cat named Chobee.

“The cats don’t do anything in particular to entertain the viewers,” said Na Eung-sic, a chief doctor at Grace Animal Clinic in southern Seoul. “But people still find comfort and joy merely through their presence, and those who are unable to afford cats can live vicariously through these videos.”

The extent of these cats’ fame has been proven through the success of various goods that were sold on crowdfunding platform Tumblbug. Thousands of cat lovers have gladly shelled out money to buy products that feature their favorite YouTube felines. SuriNoel 2019 calendars and diaries hit 525 percent of their original sales goal, gathering over 68 million won ($57,386). The butlers from My Pet Diary put their cats’ faces onto characters, creating a Ggobugi & Chobee doll set that sold 3188 percent more than their original goal and reaped nearly 320 million won. Over 5,000 people bought the cat dolls. 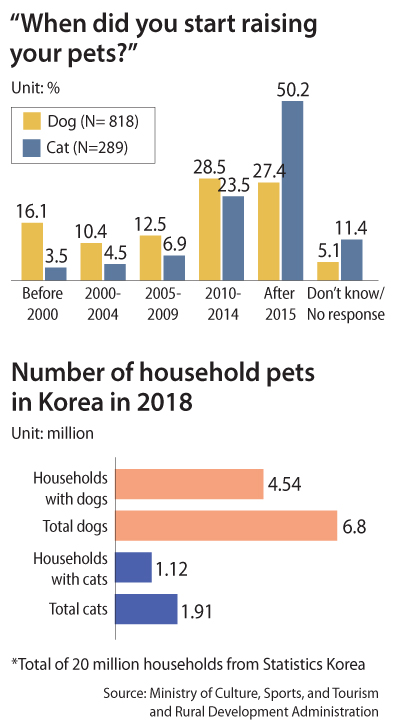 Why watch these videos?

“LAN butlers,” which is what the subscribers call themselves, regularly tune in to watch the videos whether or not they have a cat. Jung Yuna, a dog owner, also enjoys watching Mejoo and Cats and Suri Noel. “They’re cute,” she said definitively. “But I especially enjoy these channels because I can see that the owners take good care of them, and love them very, very much.”

Youn Jung-seon is another LAN butler who enjoys Cream Heroes and Mejoo and Cats, but through watching the channels, she also realized the extent of care that owners need to provide for their beloved pets. “Before I watched these channels, I thought if I was financially independent, I would be able to have a cat anytime I wanted,” Youn said. “But after watching the videos, I’ve come to realize that I need to be prudent about having another companion to care for. I still want a cat someday, but I want to bring it home when I’m really ready.”

While the videos are undeniably popular in Korea, there are also many avid subscribers from overseas.

Annika from Estonia, a subscriber to SuriNoel, wants to adopt a cat someday too. “I suppose what makes SuriNoel special is that the owner makes really creative and sometimes super funny videos with their cute cat family. Plus, I think he does a very good job of bringing out the different personalities of each cat.”

Those who already have cats or who have previously owned a cat have many reasons to tuning in. “Previously, I adopted a very old and sick boy, Suitcase, and he was with us for three years until he passed away at 18. I love to adopt kitties that need that chance,” said Kelly Bergers from the Netherlands, who subscribes to multiple cat channels. Bergers is currently living with two rescue cats from Bulgaria, whose names are Colin and Carter. “I watch a lot of cat videos because every cat has a different personality and they bring [me] so much joy! When I was in between having cats it made me less lonely. But now I just love to watch cats be their silly selves.”

Yet things aren’t always so bright for the cat channels. As popular as they are, some of the channels have faced controversies pointed out by the keen eyes of their viewers. Cream Heroes and SuriNoel have both endured criticism from fans when they realized that the cats from each channel - a Scottish Fold and a Munchkin - had genetic diseases that affect the development of cartilage and joints in their tails, ankles and knees. These breeds were bred specifically to have features such as folded ears and shorter legs, simply because of the fact that their physical deformation were considered “cute.”

Some subscribers simply stopped watching the videos after learning the details about these particular breeds.

“I grew uncomfortable [watching the videos] so I just stopped,” said Choi Jung-eun, who has a cat and a dog of her own. She had been a regular watcher of the channel My Pet Diary, where there originally were two Munchkin cats named Ggobugi and Chobee. Yet Ggobugi passed away recently after suffering from peritonitis, which was deemed incurable by doctors.

However, other LAN butlers took more aggressive steps, telling the owners of the cats that they didn’t deserve them. Although the care these LAN butlers have for the cats is understandable, they can sometimes come off as heavy handed. Subscribers often argue over how to properly take care of the cats, which Kim says is because cats are still relatively new pets.

“Specific information and in-depth research about cats has been done in veterinarian schools, but only very recently,” said Kim, a doctor from the Baeksan cat clinic. “Because of the rise in the number of cat owners, vets also have to study more to be able to advise on how to take care of them.”

When asked about the popularity of the cat channels featuring the controversial breeds, Kim admitted that they have contributed to the creation of a general awareness regarding cats. “Even for people who didn’t have that much interest in cats before, the videos grab their attention and sparks interest because cats in the channels are irresistibly adorable.

“Recently, there has been more publications and translated books about cats,” Kim noted. “Instead of just admiring them, the pet market is centering toward more demands from people and owners who want correct information on how to take care of their companions.”

According to Na, a chief doctor from Grace Animal Clinic, these cat channels will become more careful with what videos they upload because there are now more animal-conscious subscribers closely following them. “But I think there will be an influx of vets going onto the YouTube as well, as more vets create their own channels to offer interesting and useful information about cats.”