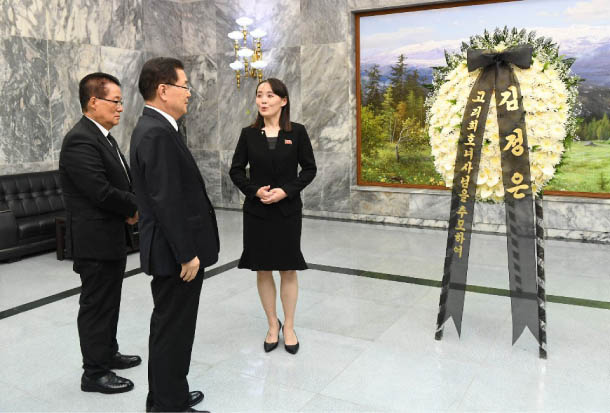 North Korean state media on Thursday again slammed the South for not moving forward with efforts to improve relations because of its ties to the United States, a day after Kim Yo-jong promised to deliver Seoul’s request for an inter-Korean summit to her brother, the North’s leader Kim Jong-un.

Kim Yo-jong led a North Korean delegation to the northern side of Panmunjom on Wednesday to express condolences for the passing of former first lady Lee Hee-ho, and was received by the Blue House National Security Office chief, Chung Eui-yong, and Party for Democracy and Peace Rep. Park Jie-won, who is also the deputy chair of the Kim Dae Jung Peace Center.

Park later told reporters of his disappointment that the North did not send a mourning delegation to Seoul, where they would have been expected to act as special envoys, as they had when Lee’s late husband, former President Kim Dae-jung, died in 2009.

In response to Park’s request that their Panmunjom meeting would lead to new inter-Korean and U.S.-North Korea summits, Park further revealed on a radio program that Kim Yo-jong “firmly” responded that she would convey this message to Kim Jong-un.

Yet both the fact that the North did not send its delegates to Lee’s funeral altar in Seoul and the accusatory commentary published on its leading mouthpiece, the Rodong Sinmun, on Thursday, suggests Pyongyang has little intention of holding a new summit with South Korean President Moon Jae-in unless Seoul breaks with the U.S. sanctions regime on the North.

“North-South relations can only be improved through national cooperation,” the editorial’s Korean-language version read. “No other party may intervene in joint efforts to solve inter-Korean issues and any attempt to bring in such foreign powers into the internal issues of the nation will be unable to escape the entire nation’s censure.”

The “national cooperation” brought up in the commentary is believed to refer to the North’s desire to resume economic ventures with the South, such as the Kaesong Industrial Complex or Mount Kumgang tours, which have been ruled out by Washington unless the North denuclearizes. Another editorial in Uriminzokkiri, another state-run outlet, from Thursday blamed the United States for bringing the situation on the Korean Peninsula “to a serious and irrevocable state.”

Following his keynote speech at the Oslo Forum during his trip to Norway, Moon expressed his desire to hold another summit with Kim Jong-un in the near future before U.S. President Donald Trump’s scheduled visit to Seoul later this month. Moon, however, added that the possibility of such a meeting and its timing was “ultimately up to Kim’s choice.”

A senior Unification Ministry official on Thursday said that while Seoul was “concentrating efforts” to hold a top-down style summit at an early date, it was not considering the possibility of holding high-level talks with Pyongyang to prepare for an event.

This passivity may owe to the fact that the North continues to shun meetings with the South at the two Koreas’ liaison office in Kaesong, a form of protest it has leveled at Seoul for months since the collapse of the second U.S.-Korea summit in Hanoi, Vietnam, in February. The Unification Ministry’s new vice minister and the South’s top liaison officer, Suh Ho, is set to make his first trip to the office on Friday, but the North has given no indication that his counterpart will come to Kaesong to meet him.