It’s only other people’s money

It’s only other people’s money 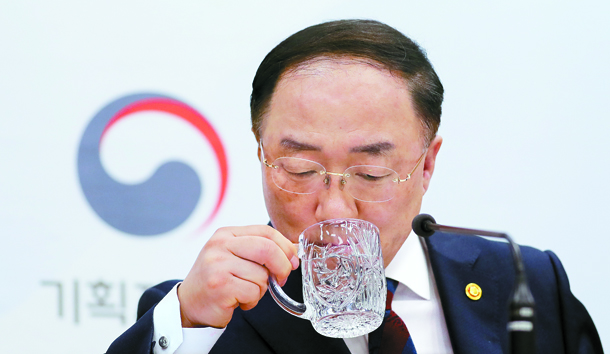 Deputy Prime Minister for the Economy and Finance Minister Hong Nam-ki at a briefing on the need for an additional 6.7 trillion won (＄5.65 billion) supplementary budget to revitalize the economy. [NEWS1]

In the financial district of the City of London, they say, “It’s only OPM.” Here, OPM means “other people’s money.” The responsibility of the risk that investment banks take to raise stock prices goes to the shareholders. Bankers receive a portion of compensation in shares and stock options. They make risky investments to lift stock prices. The losses go to the shareholders and taxpayers. This is what we witnessed during the global financial crisis.

Investor Nassim Taleb, who predicted the subprime mortgage crisis and coined the term “black swan,” called this phenomenon “Bob Rubin trade.” The accountability goes to others, while one takes only profits. It is named after former U.S. Secretary of Treasury Robert Rubin. He was the chairman of Citibank, which was insolvent and was rescued by government funding. But he did face any accountability.

Taleb stressed that because politicians and high-level bureaucrats pursue a Bob Rubin-like trade style, they do not take responsibility for their poor judgment, as the victims are taxpayers or shareholders. They take a “dine-and-dash” approach.

I am worried that the Korean version of “Bob Rubin trade” may be the Moon Jae-in administration’s income-led growth policy. Former Blue House policy adviser Jang Ha-sung said in November 2018 that the effects of the policy would be seen in the following year.

After serving about two years as policy chief at the Blue House, he was appointed ambassador to China. Despite his guarantee, the effects have yet to be seen. Vice Prime Minister for the Economy Hong Nam-ki said on June 14 that a special measure is needed in the second half of the year, as the risk of an economic downturn are growing.

The government treasury is already wide open. In addition to the 470 trillion won ($396 billion) budget for the year, an additional 6.7 trillion won supplementary budget has been announced. I feel dizzy when I think about the possibility of “special measure” being added. For politicians and bureaucrats, it’s only OPM.