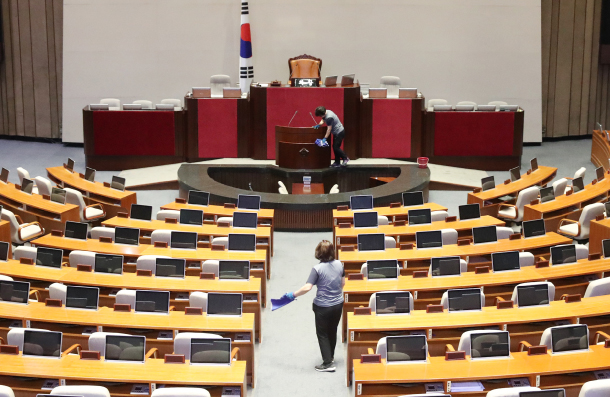 Janitors clean the main conference hall of the National Assembly on Monday as four political parties without the main opposition Liberty Korea Party agreed to convene a special session. [YONHAP]

The ruling Democratic Party (DP) and three minor parties on Monday filed a request calling for a special session of the National Assembly without the main opposition Liberty Korea Party (LKP) after the LKP refused to lift its boycott on the legislature despite weeks of negotiations.

In an internal party meeting that afternoon, the DP’s lawmakers agreed to cooperate with three minor parties to open June’s legislative session without the LKP as a last resort after negotiations between its floor leader, Rep. Lee In-young, and the floor leaders of the LKP and Bareunmirae Party fell apart over the weekend. A total of 99 lawmakers from the four parties put their names on a written request to open June’s special legislative session, far above the 75 seats necessary to convene a provisional session.

“We’ve done all we can and waited as long as possible,” said DP chairman Rep. Lee Hae-chan at a party meeting on Monday morning. “Today we must bring an end to the extraordinary situation facing the National Assembly.”

Per parliamentary law, the special legislative session is set to begin three days from the moment lawmakers file for its opening, or this Thursday.

While the special session could kick off discussions into many matters that require legislative review, like a decision on whether to extend exemptions for businesses to operate with flexible working hours, it will likely not resolve the most pressing issue currently facing the National Assembly - approving the government’s 6.7 trillion won ($5.65 billion) supplementary budget request, which was submitted in April.

Due to the parliamentary hiatus that began as a result of the LKP’s boycott of legislative activities, constituent parties have failed to meet the deadline to appoint new members to the budget committee that will be tasked with reviewing the budget request before it is voted on. Even if such a committee was formed and manages to approve a budget plan, it remains unclear whether the DP can rally the minor parties to gain majority approval on the floor.

Since it withdrew from legislative activities after failing to prevent the DP and its allies from fast-tracking controversial bills in April, the LKP has refused to return to work unless the DP agrees to hold parliamentary hearings on the Moon Jae-in administration’s economic policies. This demand was ruled out by DP floor leader Rep. Lee, who characterized it as an attempt by the LKP to put the Moon government on trial for political purposes.

The Bareunmirae Party’s new floor leader, Rep. Oh Shin-hwan, tried for weeks to broker a compromise between the two major parties to normalize parliamentary activities, but neither side budged. On Sunday, his deadline for a compromise passed with no deal struck. While the parties reportedly reached a broad understanding in terms of how to proceed with the fast-tracked bills, which include political reform proposals that may affect next year’s parliamentary elections, they clashed over whether to extend the mandates of the political and judicial reform committees in the legislature that are designed to review the contentious bills.

LKP floor leader Rep. Na Kyung-won put the blame for the ongoing political deadlock on the Moon administration. Na claimed last week that the Blue House was “jeering and pressuring the opposition,” making it impossible for them to normalize the legislative process. After a party meeting on Monday, the LKP even demanded that the DP retract the fast-tracked bills and apologize for pushing them through without the LKP’s consent. Analysts say the LKP may deliberately be taking an obstructionist strategy to position themselves as the center of opposition to the Moon government.

“[The LKP’s actions] appear to be far from what the public is demanding and may be intended as a means to instill distrust of the political establishment among the public,” Chae Jin-won, a professor of comparative politics at Kyung Hee University, told the Korea JoongAng Daily.