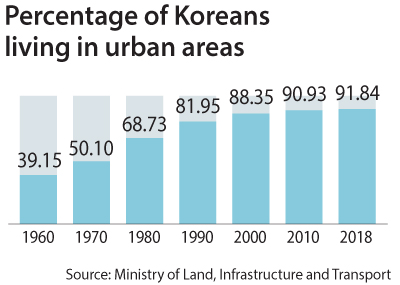 Almost all Koreans live in cities, which occupy only a small portion of the nation’s total area.

According to the Statistics of Urban Planning 2018, published jointly by the Ministry of Land, Infrastructure and Transport and the Korea Land & Housing Corporation, 91.8 percent of Koreans, or 47.59 million people, were living in urban areas, which only take up 17,789 square kilometers (6,868 square miles), or 16.7 percent, of usable land areas designated by the government.

Although the urban areas increased 0.9 percent in size and managed areas grew 0.2 percent from 2017 to a year ago, natural preserves lost 0.2 percent.

The proportion of Koreans living in cities has steadily grown over the years. While only 39.15 percent of Koreans lived in urban areas in 1960, the number broke 80 percent in 1990 and went above 90 percent in 2005.

Around 80,000 of the development projects authorized were in Gyeonggi, followed by 31,085 in North Gyeongsang and 28,567 in South Jeolla.