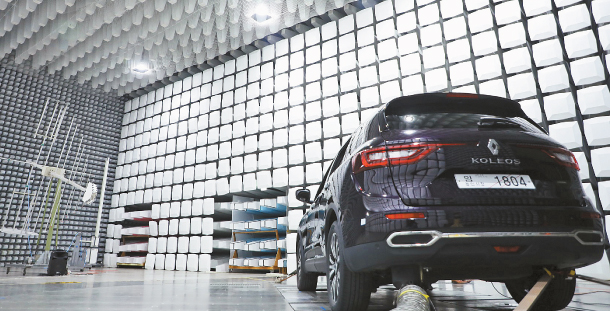 Renault Technology Korea will strengthen its position within the group, as the company is now well-placed in the Africa-Middle-East-India-Pacific region. [RENAULT SAMSUNG]

Renault Samsung Motors is strengthening its competitiveness to advance into the global market by increasing its research and development (R&D) capabilities. It has been recognized as a strategic R&D hub within Renault Group, further strengthening its position within the group.

Due to a recent change in the local headquarters of the Renault Group, the company is well placed in the Africa-Middle-East-India-Pacific (AMI-Pacific) region that includes three continents and more than 100 countries. It now has an opportunity to make inroads in a larger market.

Since the reorganization of the regional headquarters, a chairman of the AMI Pacific, Fabrice Cambolive, showed a great interest in the Korean market and selected Korea as the first place to visit.

The company was able to receive such active support and attention from the regional headquarters due to the ability and techniques that it accumulated for several years.

The excellent research team of Renault Technology Korea carried out various global projects in a global research center where all of the alliances’ technologies - such as vehicle design, layout, analysis, various tests and production technology for mass production - are involved.

As a core R&D base of Renault Group, Renault Samsung is responsible for taking charge of developing the group’s global C and D segment sedan and sport utility vehicle (SUV) and leading new car development in Asia.

Renault Technology Korea is making efforts to strengthen its competency in related technologies in accordance with Renault-Nissan-Mitsubishi Alliance.

It will install autonomous navigation technology in more than 40 models by 2022, introduce 12 new electric vehicles, apply its CMF platform to more than nine million vehicles and expand connectivity.

The Renault Group Vehicle Testing Center is the first vehicle testing center in Asia within the Renault Group, which is responsible for testing the new vehicles developed by Renault Samsung Motors and Renault Group vehicle in the Asia Pacific region.

In recent years, it has been actively working with domestic start-up companies to develop new technologies that will lead the global automobile market.

On June 5, Renault Samsung Motors held an event at Renault Open Innovation Lab Korea in Seongnam, Gyeonggi, to demonstrate innovative technology that has been developed with domestic start-ups.

“It was very impressive that these technologies are feasible to operate and possess potential business opportunities, said Samsung President Dominique Signora. “I look forward to the Renault Open Innovation Lab Korea leading the market and making a greater achievement.”

Renault Open Innovation Lab Korea is one of four innovative labs - along with Silicon Valley in the United States, Tel Aviv in Israel and Paris in France - that were opened by the Renault-Nissan-Mitsubishi Alliance and Renault Group.

It has been playing an active role in jointly developing automobile technology with domestic start-ups and supporting it to advance into the global market.

“Korea is the best market place to demonstrate new technologies, as various consumer needs are arranged and trends are volatile,” said Kim Ho-woong, a project leader of Renault Innovative Lab Korea. “Renault Samsung Motors Alpha team was able to get visible results in a short time, as experts in each field of the company have been cooperating with various start-up companies by setting consumer satisfaction as the top priority.”