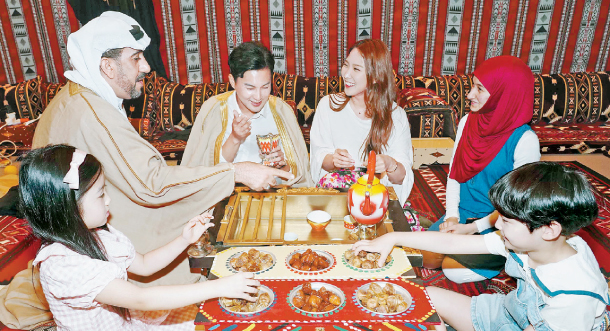 The rich culture of Saudi Arabia can be enjoyed in the heart of Seoul until July 3 at the Grand Hilton Hotel in Seodaemun District, western Seoul.

Although the event is the first in Asia, similar programs have been organized in other parts of the world to promote the culture and history of Saudi Arabia. According to Ithra, while Saudi Arabian culture is unfamiliar to most Koreans, the various experience programs will allow Koreans to get a glimpse of how Saudi Arabians live.

Different kinds of flowers, one of the country’s main exports, will fill the Flower Exhibit section. Visitors will be able to take as many photos as they wish in the area, according to the organizer. In the Saudi Film Screening zone, three films, “Joud,” “50 Thousand Photographs” and “The Cave,” will be screened at different times throughout the week. In the Photography and Video Art Exhibition zone, visitors will be able to learn about the history and culture of Saudi Arabia by looking at photographs and documentaries with a curator.

Besides the three zones, traditional performances will also be held everyday at different times. Visitors will also have a chance to listen to the traditional instrument rababah, known as the violin of the Middle East.

Children can also have fun at a special corner filled with traditional games from Saudi Arabia and also eat and drink various traditional dishes from the country.

A detailed schedule of the program is available at www.bridgestoseoul.com or by calling 070-4353-1708. Shuttle services to and from City Hall and the Grand Hilton Hotel will be available for free during the Culture Week.