SK plans its own pursuit of happiness

SK plans its own pursuit of happiness

SK Group has doubled down on its value initiative, putting an emphasis on the happiness of employees alongside its long-term commitment to social value.

Some 80 executives from SK gathered Tuesday in Incheon, Gyeonggi, for a business strategy meeting. There, SK Holdings CEO Chey Tae-won, the group’s de facto head, ordered management to come up with plans to enhance the happiness of SK workers. 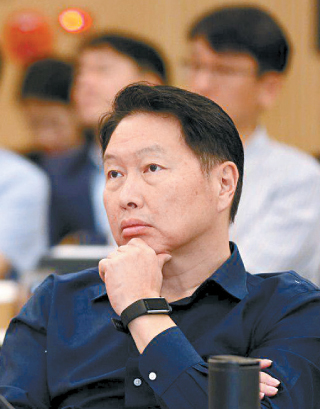 SK Group said that pursuing workers’ happiness is correlated with creating social value, a core initiative stressed by Chey over the last year.

“For workers to be happy, the company first needs to be sustainable,” the group said in a statement. “While pursuing a so-called happiness strategy, the group will continue to execute plans to create social value.”

The heads that gathered Tuesday - including SK Group Vice Chairman Chey Jae-won, SK Discovery Vice Chairman Chey Chang-won and SK Supex Council Chairman Cho Dae-sik - agreed that a “happiness strategy” should be crafted based on the ideas of the workers themselves rather than from the top. They also agreed that they should pursue the happiness of customers, shareholders, suppliers and society to ultimately make workers happy.