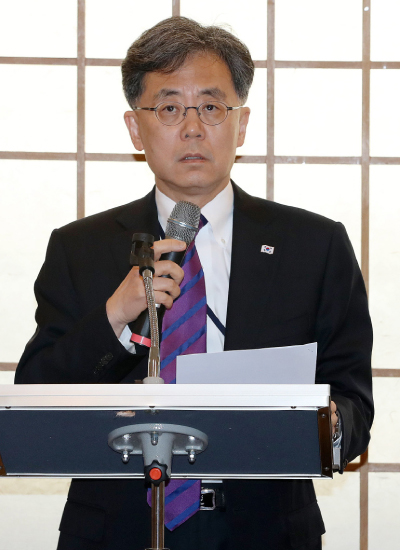 In a clear reflection of the frozen state of bilateral relations, no summit will take place between President Moon Jae-in and Japanese Prime Minister Shinzo Abe on the sidelines of this week’s Group of 20 (G-20) forum in Osaka, Japan, a senior presidential aide said Tuesday.

“There will be no Korea-Japan summit,” the official said. “We are always ready to meet, but it appeared that Japan is not ready.”

According to the official, Japan never proposed a summit to Korea. “We have said we are ready to meet, but Japan gave no response,” he said.

Moon is scheduled to start his three-day trip to Osaka tomorrow to attend the G-20 summit, a forum of world leaders from 20 large economies and international organizations to discuss international economic cooperation.

Korea-Japan relations have rapidly deteriorated since Moon took office in May 2017 and challenged a bilateral agreement to settle the issue of Japan’s wartime sexual enslavement of Korean women, signed in 2015 during the presidency of his predecessor, President Park Geun-hye.

The diplomatic chill worsened after the Supreme Court of Korea ruled late last year that Japanese companies were responsible to pay compensation to individual Korean victims of wartime forced labor. The last time Moon and Abe had a bilateral summit was last September on the sidelines of the United Nations General Assembly in New York.

While the two leaders visited each other’s country to attend multilateral events - such as Moon’s one-day trip to Japan to attend a Korea-Japan-China summit in May 2018 and Abe’s travel to Korea in February 2018 to attend the Pyeongchang Winter Olympic Games - no substantial bilateral visit has taken place in recent years. The last was President Lee Myung-bak’s visit to Japan in December 2011.

In an interview with Yomiuri TV on Saturday, Abe snubbed Moon. “Because I am the host of the G-20 summit, schedules are full,” he said. “Because of the time limit, I want to make comprehensive judgments.”

The senior Blue House official left open the possibility of a spontaneous Moon-Abe meeting. “We are all prepared,” he said. “If Japan makes an impromptu request, a summit with Abe is always possible.”

The Blue House also suspects that Abe’s position is linked to domestic politics, particularly a legislative election scheduled for late July, according to sources.

“Japan demanded a fundamental solution to Korea, so we made a proposal,” the senior Blue House official said. “But it turned down our proposal.”

On June 19, the Korean Foreign Ministry proposed to Japan that Korean and Japanese companies voluntarily contribute to a fund to compensate the forced labor victims of Japan’s 1910-45 colonial rule. Japan flatly rejected the offer.

In January, Seoul created a plan to pay compensation to the victims using a fund raised by companies and governments of the two countries, but it was shelved due to victims’ protests. Last week’s proposal was different as only companies were to participate.

Following the G-20 summit, U.S. President Donald Trump will fly to Korea on Saturday and have a bilateral summit with Moon at the Blue House on Sunday.

Presidential diplomacy surrounding this week’s G-20 was considered particularly crucial for Korea, as Moon has put efforts into restarting stalled North Korean denuclearization negotiations ever since the Vietnam summit between North Korean leader Kim Jong-un and Trump broke down without a deal in February.

Moon’s summit with Xi will take place just days after the Chinese leader’s state visit to North Korea. Concerns have grown that South Korea’s role as arbiter in nuclear negotiations has withered following Xi’s trip, but the Blue House denied that. “Chung Eui-yong, head of the National Security Office, already visited China on June 1 and 2,” the senior presidential aide said. “So we anticipated Xi’s visit to the North.”

“Korea is the core party, and we must proactively participate in the processes to establish a peace regime on the Korean Peninsula such as declaring an end to the Korean War and guaranteeing security,” he said. “It is not true at all that Korea is being excluded.”

He also said the National Security Office of the Blue House has been actively working. “We have our own channel with North Korea, so we are having smooth communication with the North,” he said. “We are also sharing much information with the United States and continuing our cooperation.”

Deputy National Security Adviser Kim Hyun-chong said in a press briefing on Tuesday that Moon will arrive in Osaka tomorrow and host a dinner for about 400 Korean residents in Japan. In addition to the bilateral summits with leaders of China, Russia, Indonesia and Canada, separate meetings with leaders of Argentina, the Netherlands and India are scheduled. Moon will return to Korea Saturday afternoon and receive Trump shortly after his arrival.