Korean firms of any size are welcome in Georgia

Korean firms of any size are welcome in Georgia 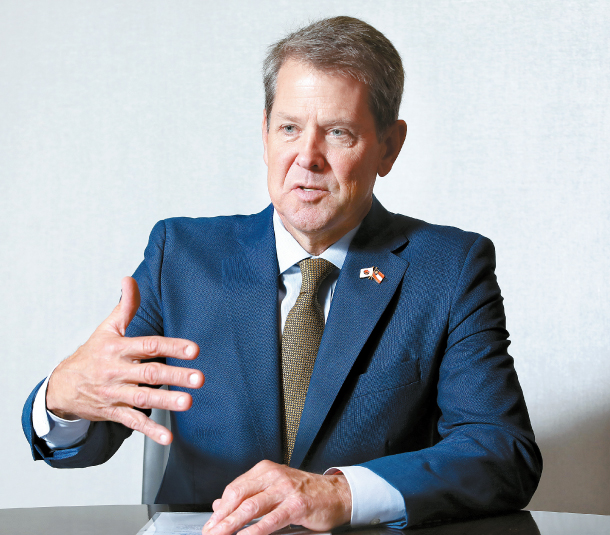 SK Innovation’s $1.7-billion battery plant in the U.S. state of Georgia was the biggest foreign investment deal the state had ever secured.

Having first set up a trade office there in 1985, Korea has been doing business with Georgia for decades, but its footprint has never been bigger. In the past year, Korea has quickly become the state’s top foreign investor, with the projects announced by Korean companies there worth about $2 billion.

Kia Motors was one of the first major Korean company to find success in the Peach State. In 2009, the local carmaker established an assembly line in West Point, Georgia, and, over the past decade, invited suppliers and partners to build facilities nearby.

“We have amazing things going on in our state when we think about manufacturing and distribution - that environment’s changing very quickly with robotics and certainly Korean companies have been on the cutting edge of that,” said Georgia Gov. Brian Kemp.

Currently, the state has 113 Korean facilities that employ more than 9,000 people. Its capital city, Atlanta, is home to the third-largest Korean community in the United States.

Having taken office in January, Kemp chose Korea for his first official overseas trip. Previous Georgia governors have visited Korea at least once during their time in office, but never as the first stop.

Below are edited excerpts from a Korea JoongAng Daily interview with Kemp at the Four Seasons Hotel in central Seoul, Thursday.

Q. Korea was your first foreign destination as governor. Why did you choose to come here?

A. Definitely it sends a strategic message on our team’s behalf and my administration on how important Korea has been to our state - really for decades now. But I think certainly in the last 12 months as [Former] Governor [Nathan] Deal was transitioning out of office and I was transitioning in. We had an incredible amount of investment into the state, some great announcements and we believe there will be more in the future.

SK Innovation is behind Georgia’s latest mega-project. Can you share what you told the company’s top executives?

I can’t share personal discussions but [SK Innovation] knows where we stand.

We were talking to the Kia folks yesterday, and I think having the governor involved, on the ground, in Korea, lets them know that we’re not just satisfied that we have [their commitment now], we’re [also] looking to the future [together].

One of the things we were talking to Kia about and that we will be talking about today [with SK Innovation] is what is the future of electric vehicles. What do we need to do policy-wise as a state to be prepared for that? One of the issues we have in Georgia is electric charging stations. We’ve got to start preparing for that.

I know that you cannot be complacent - you have to continue to pay attention and continue to prepare for the future. I think that’s one reason, I think, [why] Korean companies are doing so well. They are very forward thinking. They’re not just satisfied with the vehicle or the battery that they’re producing today but [think about] what they are going to produce tomorrow to continue to be a factor in their industry and continue to drive their sales growth.

Does technology from Korean companies set a good example in Georgia’s manufacturing industry?

How can the partnerships with Kia and SK help secure more partners?

A lot of the bigger companies drive headlines, and certainly having large companies like Kia and SK Innovation investing in Georgia sends a great message to other Korean businesses that this is a place they’re very comfortable doing business.

It helps us open up other markets because we’re not just looking for big companies, we’re looking for [companies] just like Sangsin Brake. They brought 200 jobs and $20 million - which is not a large investment but for the number of jobs in McDonough [Georgia] - that is huge for the local community. We want mid-sized and smaller companies that are here looking for other markets [to know] that we are glad to talk to them as well.

Kia’s factory brought in many suppliers and partners to settle nearby. Are you looking forward to a similar effect from SK Innovation?

Absolutely. I think that’s the reason states really push hard for these deals. Because they know there are others that follow. I think one example is the Hanwha Q Cells deal up in Dalton. It’s making solar panels and we’re building a lot of solar farms in our state. And that’s good for us to diversify our energy supply.

It sends a great message to other companies like that and other suppliers that help that market.

SK Innovation was granted a generous incentive. Will other Korean companies be able to enjoy the same benefits?

We try to be consistent in what we’re doing in our state. We have a lot of things that, by statute, we can offer to companies that are in Georgian law.

We have other options on the table that the department has and the governor has to support the legislature, and depending on what projects are out there, how many jobs the businesses are going to bring, what kind of business it is, the level of salaries they plan on paying - companies potentially could be eligible for these things.

Manufacturing is a labor-intensive field. What benefits can Georgia offer?

In labor, finding workers is the No. 1 issue. It doesn’t matter how many incentives somebody gives you.

Georgia is a good place for companies to build [facilities] quickly and get into production quickly. We have a training program called the “quick-start” program, which will help them to get extra workforce trained and ready to work.