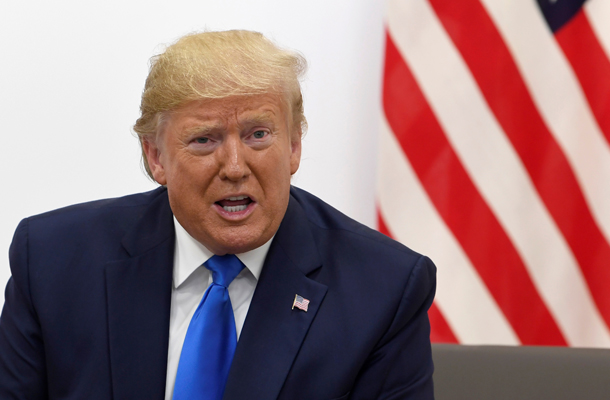 Trump extended the invitation on Twitter hours before his arrival in Seoul for a two-day visit, which includes a dinner, a summit, working luncheon and a press conference with President Moon Jae-in.

Trump and Moon were in Osaka until Saturday afternoon to attend the Group of 20 Summit. Participating leaders from around the world, including Chinese President Xi Jinping and Russian President Vladimir Putin — both of whom had summits with Kim in the past weeks — were also in Japan and had bilateral summits and discussed North Korea with Trump.

"After some very important meetings, including my meeting with President Xi of China, I will be leaving Japan for South Korea (with President Moon)," Trump wrote. "While there, if Chairman Kim of North Korea sees this, I would meet him at the Border/DMZ just to shake his hand and say Hello(?)!"

The demilitarized zone (DMZ) is a 250-kilometer (160-mile) long, 4-kilometer-wide border that has separated the two Koreas since the Korean War truce in 1953. Despite its name, it is one of the world’s most heavily armed strips of land.

On his first presidential trip to Korea in November 2017, Trump tried to visit the DMZ, but his helicopter had to return due to bad weather.

Later in the morning on Saturday, Trump elaborated on his invitation, stressing the spontaneous nature of the offer. “All I did is put out a feeler if he'd like to meet,” Trump said, adding that “I just thought of it this morning.”

“If he's there, we'll see each other for two minutes and that's fine," he said in comments to reporters at the start of a breakfast with Crown Prince Mohammed bin Salman of Saudi Arabia.

“We have some very big meetings with President Moon,” in Korea, Trump said, adding that he will be visiting the inter-Korean border.

“So we'll be there and I just put out a feeler because I don't know where [Kim] is right now,” Trump said. “He may not be in North Korea, but I said if Chairman Kim would want to meet I would be at the border, and certainly we seem to get along very well.”

Trump also said the United States would be “having a war right now with North Korea, “frankly if I didn’t become president,” stressing his personal relationship with Kim.

Before entering the final session of the G-20 forum, Trump reportedly approached Moon in a lounge and asked if he had seen the Tweet. Moon replied that he did, and Trump told him, “Try doing.”

Speculation ran high in recent weeks that Trump would visit the demilitarized zone during his two-day trip to Korea. Some experts, including former Unification Minister Jeong Se-hyun, said a meeting between Kim and Trump was possible at the truce village of Panmunjom.

Trump, however, denied before leaving Washington on Wednesday that he had a plan to meet Kim. Saturday morning’s invitation was a change from that position.

If they meet, it will be their third meeting since a first summit in Singapore in June 2018 and a second summit in Vietnam in February. The Hanoi summit ended without a deal, and denuclearization negotiations have stalled ever since.

A series of diplomatic moves have been made in recent weeks, including Chinese President Xi’s visit to Pyongyang on June 20 and 21 to meet with Kim. Kim and Trump also exchanged personal letters earlier this month, fueling anticipation of a revival of talks.

Moon is also putting efforts to end the impasse. He met with Xi on Thursday and Russian President Vladimir Putin early Saturday.

Later Saturday evening, Moon is scheduled to have a reception and dinner with Trump at the Blue House. On Sunday morning, the two leaders will have an expanded summit and working luncheon at the Blue House. They will also address media in a joint press conference.

While the Blue House said their afternoon schedule has yet to be fixed, Trump told reporters that he was going to the inter-Korean border with Moon.

While a Trump-Kim meeting was proposed, it seems that a trilateral meeting including Moon is not being pursued.

“There is no plan for a trilateral summit among Moon, Kim and Trump during Trump’s stay in Korea,” a senior presidential aide said earlier this week.

Asked about Trump’s surprise invitation to Kim to meet him at the border, the Blue House said nothing has been decided. “As of now, nothing is fixed,” Ko Min-jung, Blue House spokeswoman, said Saturday morning about the visit. “Our hope for a North-U.S. dialogue remains unchanged.”

Earlier Saturday morning, the Blue House said Kim had made clear that his goal for the denuclearization negotiations is securing his regime’s security. Kim made the remarks when he met Russian President Vladimir Putin in April, and Moon was informed about it when he had a summit with Putin from 12:36 a.m. to 1:29 a.m. on Saturday.

“Putin told [Moon] that Kim had stressed during their summit in April that the security of the North Korean regime is the key and measures in return for denuclearization are necessary,” Han Jung-woo, deputy spokesman of the Blue House, said.

When Moon had a summit with the Chinese president on Thursday, Xi also informed Moon about what Kim wants from the denuclearization talks.

“Kim’s will for denuclearization remains unchanged,” Xi was quoted as telling Moon by the Blue House. “Kim is also working to develop his economy and improve the livelihoods of the people based on his new strategy, and he hopes for a better outside environment.”

Based on the messages relayed by Putin and Xi, Kim wants regime security and a lifting of economic sanctions in return for taking steps to abandon nuclear arms. Kim’s reported remarks also appeared to be a message to urge the United States to show some flexibility.