[REVIEW] Fun for fans, but gamers not so much: If you know the band, BTS World will likely be a blast to play

[REVIEW] Fun for fans, but gamers not so much: If you know the band, BTS World will likely be a blast to play 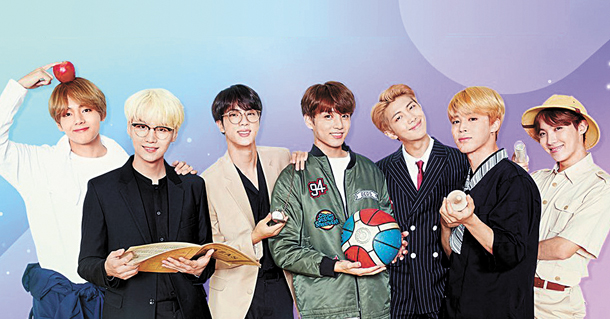 BTS World, the latest mobile game published by Netmarble, was released on June 26 and stormed app stores all over the world. [NETMARBLE]

BTS World, the latest mobile game published by Netmarble, is a marriage of two of Korea’s core strengths: games and K-pop. But just as some weddings have more guests on one side than the other, more BTS fans are probably playing than gamers.

According to Netmarble, BTS World stormed Apple’s app store in 33 regions within the first 14 hours of its release, on June 26 at 6 p.m., and ranked No. 1 as of Saturday afternoon in 51 regions. It was a top-five game in 110 regions. In Korea, the game was downloaded 1 million times via the Google Play Store in the first day - a number equivalent to the number of ARMY.

Fan reaction is no less hot, with a heavy posting of questions and tips on various internet communities and the sharing of screen captures of photographs and videos of the members. Netmarble did warn that people should not be taking screen captures and even took measures to prohibit them from doing so within the program - but to no avail. Even band member RM posted screenshots of the game on the official BTS Twitter, urging fans to play even more.

On day two after the release, two things were evident: the game is for fans - specifically for those willing to spend money on the game - and will likely be difficult for those unacquainted with the actual band members to enjoy.

The game, as explained by Netmarble on its official website, lets users be the manager of the group to “help nurture BTS on their quest to become great artists.” Users travel back in time to 2012, before the seven members make their official debut, and must start by finding and casting each member. They decide on the band’s name, find their first house, hold their first practice and record a song, taking each monumental step with the members. The game rewards them with never-before-seen videos and photographs for every accomplishment. Getting phone calls - which are prerecorded - and texts - which are also programmed - from individual members in between the stages motivates fans more than anything else. 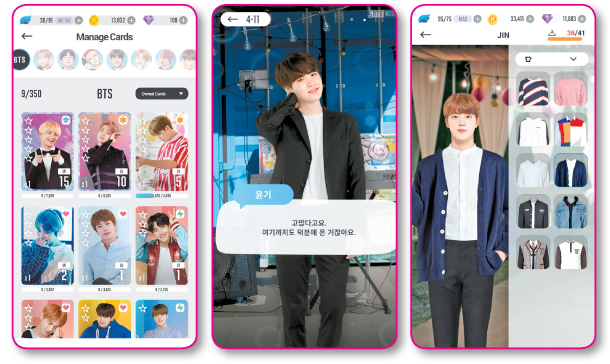 BTS World lets users become the group’s manager, beginning with casting the members. From left: users must use member cards to complete different missions; users get to have what feels like a one-on-one conversation with each member; users are rewarded with different costumes for members after completing the missions. [NETMARBLE]

At a certain point, it becomes almost impossible for a player to advance to the next stage without spending cash, upgrading the member cards (which are used for accomplishing missions), feeding the members snacks to get their energy up (when they get angry from too much training) or waiting for the daily distribution of supplements. Each little step to get a tiny reward becomes too tiring.

Another point: there’s really nothing to do but click. Users are occasionally presented with choices, but most of the time, there really isn’t much to do.

The flow looks to be very much linear, in the sense that the outcome will end up being the same no matter what the player does. In most simulation games, a wide range of outcomes are possible depending on the choices made, and the game forks down many unique routes.

But we really won’t know exactly where the game leads for a few days, until players have had a chance to work their way through the various levels.

BTS World is a blessing for fans, but how much you like it will probably depend on how dedicated you are to the group.