Lee Kang-in chooses not to comment on transfer rumors

Lee Kang-in chooses not to comment on transfer rumors

Valencia CF’s Korean prospect Lee Kang-in kept mum about his immediate future on Monday, amid rumors of a move to another club for the next European season. 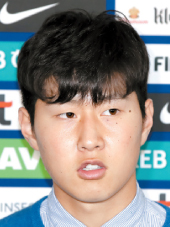 The 18-year-old helped lead Korea to a runner-up finish at the FIFA U-20 World Cup in Poland last month and earned the Golden Ball as the tournament’s best player. It was Korea’s best performance at any FIFA men’s tournament, and Lee is the first Korean man to earn the top player award at a FIFA competition.

Lee is under contract with Valencia through June 2022, and Spanish media have speculated that the midfielder will be loaned to another club - possibly Spanish side Levante - that will give him more minutes.

Lee made his first team debut with Valencia last October in the Copa del Rey and ended up appearing in 11 matches in all competitions in the 2018 to 2019 season.

Speaking to reporters at a U-20 national team function in Seoul, Lee was evasive about his future destination.

“Honestly, I don’t have anything to say about that,” Lee said. “Whether I stay with Valencia or go somewhere else, my goal is always to give my best effort wherever I play.”

With the European club season in the books, Lee said he’s been enjoying his downtime following the end of the U-20 World Cup and he wants to keep it that way for now.

“I don’t know when the decision [about my next stop] will be made,” added Lee, who said he’ll travel to Spain sometime in early July.

In terms of his lack of playing opportunities with Valencia, Lee said, “We’ll see what happens. The new season hasn’t started yet.”

Lee was in Seoul with the rest of the U-20 national team to receive prize money from the Korea Football Association (KFA) for their historic accomplishment in Poland. In addition to being the team’s most dangerous offensive player on the field, Lee was also the team’s biggest clown away from the pitch. Lee said he always enjoys being around his teammates, no matter what the occasion, and he has spent time with a few of them in small groups before Monday’s function.

National team members playing their club football in Korea’s K League are still in the midst of their seasons. Some players, such as starting goalkeeper Lee Gwang-yeon, have made K League first-team debuts after the World Cup. Lee Kang-in said he was proud of the progress his U-20 teammates have made.