Park Sung-hyun gets another one

Park Sung-hyun gets another one 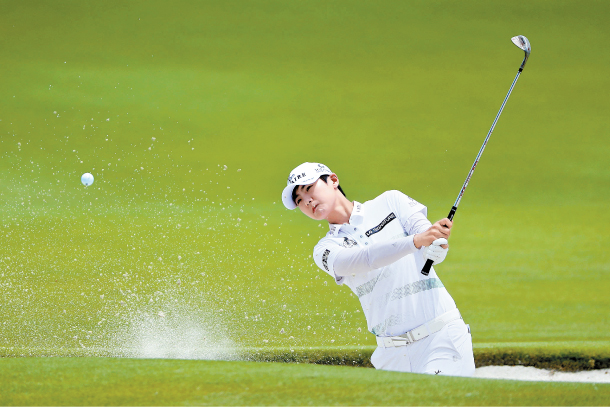 Park Sung-hyun watches her bunker shot during the final round of the Walmart NW Arkansas Championship at Pinnacle Country Club on Sunday. [GETTY IMAGES/YONHAP]

Park Sung-hyun picked up her second win of the season by winning the Walmart NW Arkansas Championship Presented by P&G at Pinnacle Country Club in Arkansas on Sunday.

Park, who started the final round as co-leader with Carlotta Ciganda of Spain, made six birdies and a bogey to shoot five under par, 66, on the final day to finish the tournament one shot ahead of runners-up Danielle Kang of the United States, Kim Hyo-joo and Park In-bee.

Heading into the final hole, the par-5 18th, Park was in a four-way tie for the lead. As Park hit the green on two and two-putted for a birdie while Kim missed her birdie putt, Park was declared the winner.

“To be honest, my round today didn’t go as well as I thought it would,” Park was quoted as saying on LPGA website. “I knew that it was important to make a lot of birdies on the front nine, but there were a lot of opportunities… But I talked with my caddie, and we both said there’s still a lot of hope left. Every single shot was really important.”

With a win, Park took home the prize money of $300,000 and is expected to once again reach the No. 1 spot in the Rolex Women’s World Ranking. This is the fourth time Park has reclaimed the top spot in the world ranking.

She first reached the No. 1 spot in November 2017 when she was just a rookie. Although she only retained the top spot briefly, she became the first rookie on the LPGA Tour to reach such heights since the ranking system was introduced in 2006.

Then, on Aug. 20, 2018, she reclaimed the top spot after winning the Indy Women in Tech Championship. After staying at No. 1 for about two months, Park slipped down the ranking and Ariya Jutanugarn of Thailand moved back up.

Most recently, she reached the top on March 4 and stayed there for five weeks, until Ko Jin-young knocked her off.

“It would definitely be good to be back on top, but to be honest, there was a lot of pressure when I was the No. 1,” Park was quoted as saying. “But I wouldn’t want to sort of keep that in mind, because I would be under pressure. But then again, it would feel nice to be the No. 1.”

Park, who tends to be a slow starter in terms of wins, got off to a quicker start of the season this year. Looking at Park’s past two seasons on the LPGA Tour, she has always struggled at the beginning of the season.

Although Park reached the No. 1 spot in the world ranking last year, she didn’t really find her stride until May, when she finally picked up her first win. Following that first victory, she missed the cut in three consecutive tournaments, but in June she got her second victory of the season, a major tournament. Then, Park added another win in August.

Even in her rookie season, Park’s first victory wasn’t until July, at the U.S. Women’s Open, and she picked up her second win a month after at the Canadian Pacific Women’s Open.

This year, her first victory came a lot earlier than expected, meaning that her goal of winning five tournaments, including a major, is looking more likely than ever. She picked up her first win of the season in March by winning the HSBC Women’s world Championship. That was only her second tournament of the season.

Then, the following week, when the LPGA Tour had a two-week break, Park picked up another win on the Philippines Golf Tour, winning The Country Club (TCC) Ladies Invitational. Despite her back-to-back victories, Park spent the next seven tournaments on the LPGA Tour without a win.

Park slowly made her comeback last week at the KPMG Women’s PGA Championship by finishing runner-up and on Sunday, finally reached the top with her seventh career win on the LPGA Tour.

Park’s win on Sunday allowed her to become the third multi-winner of the season, after Ko and Brooke Henderson of Canada.