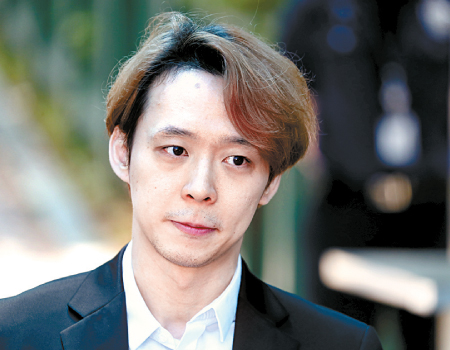 A local court gave Park Yoo-chun, an actor and former member of boy band JYJ, a 10-month suspended prison sentence with two years of probation, for using an illegal drug.

Suwon District Court ordered the 32-year-old disgraced entertainer to pay a fine of 1.4 million won ($1,203) and issued probation and treatment orders for him.

“Drug-related crimes should be harshly punished due to severe addiction and harmful effects on individuals and society,” presiding judge Kim Doo-hong said in the ruling.

Kim, however, said Park’s contrition for his behavior and the fact this was his first offense meant a suspended sentence was sufficient as a punishment and deterrent.

Clad in prison clothes, Park bowed while leaving the court following the sentence. The court was filled with Korean and Japanese fans, with some of them crying upon hearing the sentence.

Following the ruling, Park came out of a detention center in Suwon, Gyeonggi around 11:25 a.m. With tears in his eyes, Park said to a group of reporters that he “will do lots of social service and make efforts to lead an honest life,” offering an apology to his fans over his case.

Park was indicted on May 17 on charges of purchasing 1.5 grams of methamphetamine and using it together with Hwang Ha-na, a granddaughter of the founder of Namyang Dairy Products, on six occasions between February and March this year.

He was also charged with using the banned substance with the woman last fall.

During a court hearing last month, prosecutors sought an 18-month prison sentence for Park and asked for a fine of 1.4 million won against the entertainer. A lawyer for Park said he admitted to starting to use the drug to relieve stress from the cancellation of his marriage engagement with Hwang.

Park faced drug allegations after the 31-year-old Hwang was arrested on April 6 on charges of selling methamphetamine and using the illegal substance in 2015.