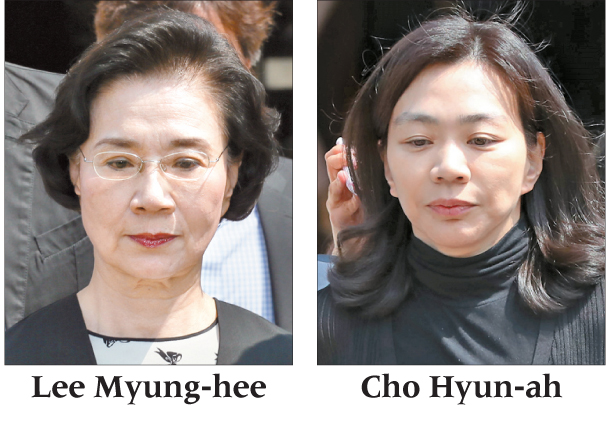 The Cho family members were charged with illegally hiring 11 Filipino women as maids by passing them off as Korean Air employees.

The suspended prison sentences for the two Cho family members are significantly higher than what prosecution demanded. The prosecutors had asked the court only to fine the two: Lee 30 million won and Cho Hyun-ah 15 million won.

“Even though it was late, [the defendant] admitted her wrongdoings, and there were some considerable points, like the need for someone to take care of her granddaughter after the daughter was involved” in the nut-rage incident, a court official said during the trial for Lee.

“But the defendant ordered the Korean Air secretarial office to hire the maids as if the company was her and her family’s, forcing Korean Air to take part in the crime.”

Lee was accused of smuggling some 37 million won worth of fruit, pottery and decorative accessories in 46 trips from 2013 to 2018, while Cho Hyun-ah was put on trial for smuggling luxury goods worth around 89 million won from 2012 to last year in 203 incidents, also using Korean Air planes.

The remaining question is what kind of community service they will perform.

In the past, major chaebol heads found guilty of crimes completed their courted-ordered service at welfare centers.

After being sentenced to 200 hours of community service for revenge violence in 2007, Hanwha Group Chairman Kim Seung-youn cleaned and fed the elderly and the disabled at Kkottongnae, one of the largest social welfare service centers in Korea, in Eumseong County, North Chungcheong.