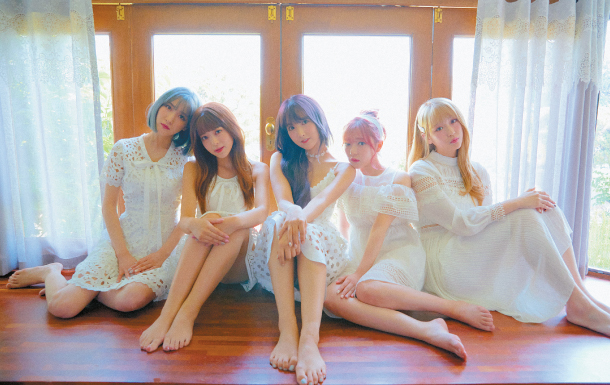 Honey Popcorn released its second EP “De-aeseohsta” on Friday. The group made headlines last March ahead of their debut, as it is made up of members who are Japanese adult film stars. [KYUN CREATE]

Honey Popcorn, a Japanese girl group that only releases music in Korea, made headlines when they debuted in March 2018 because its members had all been adult film stars prior to coming together.

Despite considerable backlash, the group is back with new members and a new EP. The group held a press showcase on Friday to promote its newest EP “De-aeseohsta” in Sangam-dong, western Seoul.

Present at the event were Yu-a and Moco, Honey Popcorn’s original members, as well as the three new additions to the act - Naco, Luka and Sara. The new members are not in the adult film industry.

“De-aeseohsta” features the members - all in their twenties - singing uplifting yet high-pitched and fast-paced melodies. While performing the choreography for the EP’s title track during the showcase, the group waved their hands like magic wands while dressed in peach blouses and shiny sequined mini skirts.

“‘De-aeseohsta’ is an encouraging song for fans,” explained Yu-a, the leader of the group. The members spoke mostly in Japanese, but added greetings and self-introductions in Korean. “We are nervous but we will try hard,” she added.

Despite performing their latest song for the first time in public, they didn’t appear to be nervous and maintained a calm demeanor while answering reporters’ questions.

“We didn’t start our group just to stop after the first album,” Yu-a told a reporter when asked why they were continuing to promote in Korea despite the negative feedback they received last year. Yu-a was previously a member of the Japanese girl group SKE48 before becoming an actress.

“When we released our first album we heard from a lot of people, including critical voices… I know that my career is not accepted in Korea. But I want to perform in front of the entire world so I couldn’t refuse when I received a proposal to join the girl group [in Korea].”

Honey Popcorn’s future was shaky last March when the group was forced to delay its debut and cancel its fan meeting in the face of controversy. Over 50,000 people signed a since-expired online petition on the Blue House website opposing the group’s debut, arguing that the members’ careers were going to have a negative influence on children.

Nonetheless, the group demonstrated unwavering determination to pursue their musical careers in Korea on Friday, citing some of their favorite K-pop girl groups they look up to.

“I liked Girls’ Generation ever since they debuted in Japan,” said Sara, while Naco added that she is a big fan of GFriend. Yu-a shared that she really liked Twice, especially its Japanese member Sana.

Music critic Mimyo believes that the fact that Honey Popcorn, a K-pop group made up entirely of Japanese members, exists is what should be the focus instead of the members’ other jobs.

“I think it’s debatable if their careers matter in whether they are able to join the K-pop industry or not,” he said.

“What’s more interesting is that Japanese people are taking this much interest in K-pop.”