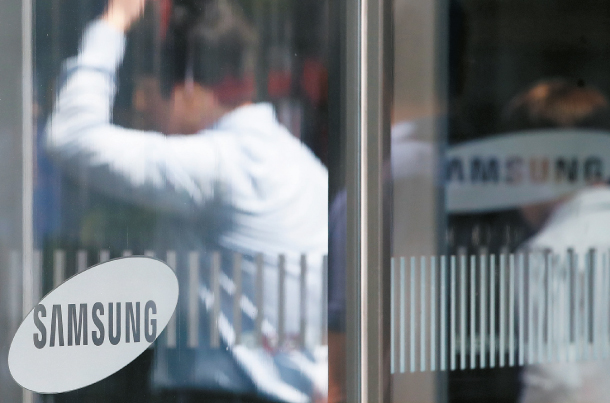 According to a company earnings guidance issued Friday, operating profit in the second quarter was probably 6.5 trillion won ($5.5 billion). Analysts were expecting the number to come in at 6 trillion won, according to FnGuide.

The results are 4.3 percent up from the previous quarter and follow two down quarters. But the operating profit came in 56.3 percent lower than the same quarter a year earlier.

In the April-to-June quarter, Samsung generated 56 trillion won of revenue, a 6.89 percent increase from the previous quarter and a 4.24 percent decline from the same period a year earlier.

Samsung did not break down performance by business division, of which it has three: chips, phones and consumer electronics. But the company did say that it booked a one-time gain related to displays.

The one-time gain may have come from payments made when clients book orders but do not complete them. Analysts say that the one-time gain was probably 700 to 900 billion won, and without it, display performance would have been under forecast.

Mobile was probably below expectations.

“Galaxy S10 sales went down faster than expected; and although sales for mid-priced phones increased, it caused a negative blow to profitability,” said Kwon Sung-ryul, an analyst at DB Investment & Securities.

Analyst Hwang Min-seong of Samsung Securities said that another possible factor was heavy discounting and promotions on its phones as it took on Huawei’s low-price strategy.

Forecasts for the rest of the year are mixed.

Despite earlier predictions that memory chip demand would rebound as early as the second quarter, prices are still falling. Memory chips were the biggest contributor to Samsung’s record 2017 and 2018 performances.

The complicated trade situation also weighs on the company’s business. A trade dispute between the United States and China, if prolonged, will push down IT demand in general. And on Thursday, Japan strengthened regulations on the export of three materials, two of which are critical to semiconductor production. Japan may also remove Korea from its “white list” of countries qualified for simplified export procedures.

Some analysts are more positive.

“In the second half, the company’s operating profit will start to increase again-the decline of chip prices will slow and growth will reach the 10 percent level, reversing the semiconductor business’s downfall,” said Kwon.