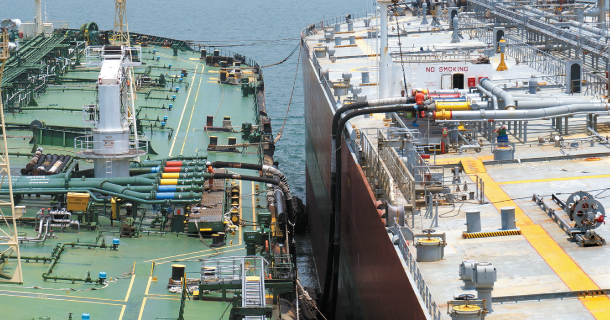 The exports and trading subsidiary under SK Innovation currently blends an average of 23,000 barrels of low-sulfur fuel for ships a day. After expanding its tank facilities, its daily capacity will reach 90,000 barrels by April next year, the company said Sunday.

Offshore oil blending refers to mixing different kinds of heavy oil in a tanker while at sea. This enables the blended low-sulfur fuel to be delivered directly through ship-to-ship transfers rather than on land, where oil blending typically takes place. For the client that purchases the fuel, this saves logistical costs for both transfer and time.

But despite the benefits, offshore oil blending requires expensive facilities and monitoring to maintain the ship around the clock. Since 2010, SK has been the only Korean company in the business. Its oil blending tanker is located in Singapore, a trade center for oil and logistics companies.

Apart from trading crude oil and blending it, SK Trading International’s other main business is exporting fuel products from SK Energy, which is currently constructing a vacuum residue desulfurization facility in Ulsan. Once the facility is completed in April, it will produce up to 40,000 barrels of low-sulfur fuel per day.

Combined with expansions for the offshore oil blending facility, SK Trading International’s daily capacity for low-sulfur fuel will reach 130,000 barrels a day by next year - a level SK says will make it the “world’s largest low-sulfur fuel supplier.”

The investments are in line with the International Maritime Organization’s strengthened regulations on marine fuel by limiting sulfur content to 0.5 percent starting from next year, from the current 3.5 percent.

“As the global fuel oil market goes through changes, there are more shippers that intend to adopt low-sulfur fuel and for the meanwhile, we expect high profitability from this sector as by late 2020 there will be an undersupply [of low-sulfur fuel,]” said SK in a statement.