Job gains in June are robust, but favor elderly

Job gains in June are robust, but favor elderly 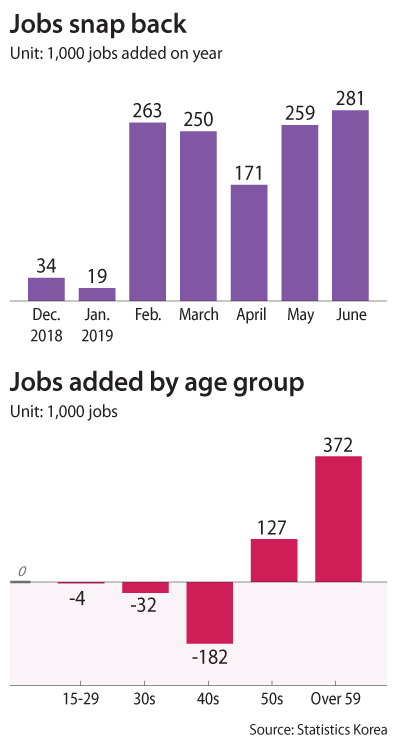 Korea added the largest number of jobs last month since early 2018, returning to strong numbers after last year’s deep slump, although lots of jobs went to the elderly.

Statistics Korea reported Wednesday that there were 27.4 million employed people in the country last month, an increase of 281,000 from the same month a year earlier.

The agency explained that the decline in the 40s age-group was because of the difficult job situation for the manufacturing sector.

Jobs in the manufacturing sector in June declined on year for the 15th consecutive month, declining 1.5 percent from a year earlier, which translates into a loss of 66,000 jobs.

The agency explained that the manufacturing sector was hurt by weakness in the electronic components industry, especially semiconductors.

“The number of employed continues to decline for electronic components, which includes semiconductors and electric equipment sectors,” explained Chung Dong-wook, employment statistics director at Statistics Korea. “The decline in such areas accounts for most of the [fall] in manufacturing.”

“As restructuring nears an end for autos and shipbuilding, the number of employed has grown,” added Chung.

The financial and insurance sectors lost 51,000 jobs. The agency explained that the fall was likely caused by downsizing by local banks.

The health care and social welfare sector, which includes many public sector jobs, added the largest number of jobs by sector: 125,000 from a year earlier.

The number of unemployed in June stood at 1.14 million, the highest for the month since 1999, in the wake of the Asian financial crisis.

The government explained that the increase was due in part to scheduling changes for regional civil service exams that were moved to June this year from May.