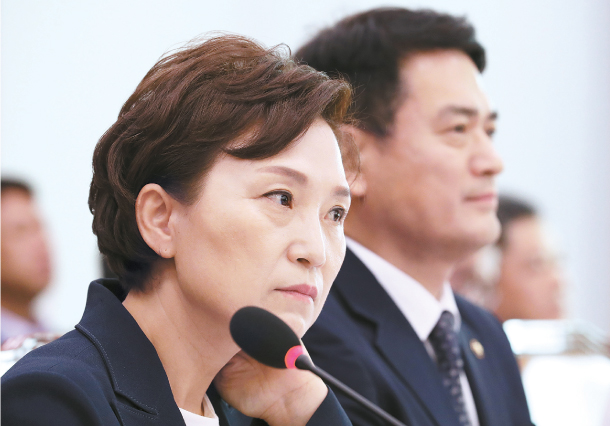 The property market is on edge as the government is set to cap prices on some real estate projects.

Land Minister Kim Hyun-mee told the National Assembly that she is intent on establishing limits for preconstruction apartment orders to target speculation.

“It is time to review the [possibility] of implementing a limit on preconstruction sales prices for apartments built on private land,” Kim said during the hearing, adding that the government is looking into easing the conditions for the government setting the cap.

The maximum limit on the preconstruction sales price will be set by the government based on the value of the land that the apartment is on as well as construction costs plus an appropriate profit.

The maximum limit on preconstruction sales prices was first adopted in September 2007 under the liberal Roh Moo-hyun administration. It implemented a number of other policies to curb real estate prices, including the comprehensive real estate tax.

But with weakness in the market since the 2008 global financial crisis, the maximum has rarely been applied.

Kim raised the possibility as recently apartment prices, especially for structures in Gangnam, southern Seoul being considered for redevelopment, have been rising despite the Moon Jae-in administration’s efforts to toughen regulations, including tightening the conditions on qualifying for loans.

According to the Seoul city government, sales were up 65 percent in the first half of the year compared to the year earlier period, mostly driven by transactions in the three southern Seoul districts - Gangnam, Seocho and Songpa.

Under the current regulation, the government can place a maximum limit to the preconstruction sales prices if one of three conditions is met: the average preconstruction sales prices of the project’s surrounding areas rose at more than twice the consumer price index over the previous 12 month period; more than five bids are received for every apartment offered (or more than 100 if the apartment is smaller than 85 square meters); or if transactions volumes for apartments are up more than 20 percent from a year earlier.

The government is said to be considering easing the first of the three conditions.

The rate of price growth versus the consumer price index increase has been lowered to 1.5 times, from two times, and the period of comparison has been reduced from 12 months to three months.

Even if prices fell recently, the caps could still be put into place if a rise occurred over the 12-month period.

In 2007, when the government ran a simulation in which preconstruction prices were capped, prices fell by 20 percent.

There are growing concerns that the government’s additional regulations could affect the overall construction industry.

“When the preconstruction sales price limit is applied, it could hurt construction companies’ profitability, as projects could be postponed for an extensive period and in some cases cancelled,” said Kim Chi-ho, researcher at Korea Investment & Securities.

That’s lower than the $17.8 billion of construction orders in the first seven months of 2018.