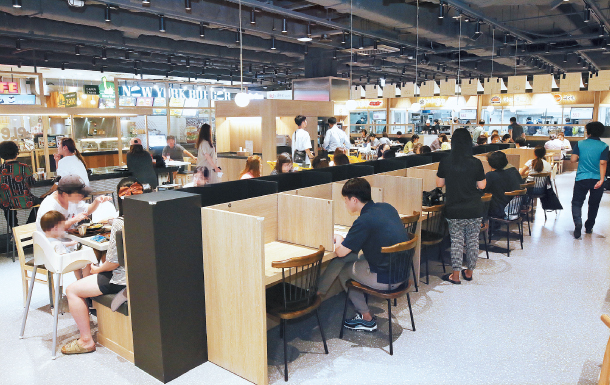 Visitors on Thursday have meals at single seats at the food court in Emart Namyangju. Emart refurbished the store and installed 10 single-table seats. [EMART]

Not only is the discount chain seeking to attract famous restaurants, it is also installing tables for single customers in an effort to attract young people who are now more likely to shop online than in stores.

A 31-year-old surnamed Jeon was eating alone on July 8 at a food court in Emart’s branch in Namyangju, Gyeonggi. It was the day that Emart finished refurbishing its food court and installing single tables.

“I frequently work at home, so I often eat at food courts in large retailers near my house,” said Jeon. “In the past, I was self-conscious when having a meal alone at a table for four people, but because of the single seat, now I can comfortably have a meal alone.”

Choi Hyun-jung, a 21-year-old university student, also occasionally comes to a large retailer to eat. She is attracted to the locations because she wants to explore the many eating options.

“I mostly shop online, so I have rarely gone to large retail stores, but now I go there often as popular eateries came one after the other,” said Choi.

“I do not have to go around and look for restaurants and not only can I have a meal with my friend, but also I can look around the mart and enjoy our time, so it is like killing two birds with one stone.”

They are focusing their effort to attract young customers in their 20s to 30s - by bringing in well-known restaurants, building single-seat tables and redecorating.

The retail industry is paying close attention to a dominant trend of the day: millennials tending to eat and live alone.

Emart is actively trying to interest consumers by hosting a variety of restaurants.

By bringing many famous restaurant chains under one roof, it is trying to draw customers most comfortable with online shopping.

Emart updated the food courts at eight stores to its new Market Locus brand, which has a variety of restaurants. They have around 30 restaurants, including Owl’s Cutlet and Emoi, a Vietnamese rice noodle restaurant.

The number of customers in their 20s to 30s visiting Market Locus from August 2018 to June this year has increased 33 percent from the same period of last year.

Bringing in restaurants directly led to the increase of sales.

The aggregate sales of the eight stores with the Market Locus upgrades is up 2 percent from August 2018 to June 2019 despite the poor sales of Emart more generally.

By renewing the interiors of the stores to be more like bright, sophisticated cafes, Emart is providing a pleasant environment where consumers can have meal as well as get-togethers.

Due to the rise of online consumption, the sales of offline stores are plummeting and cutthroat competition is making the competitive power of large retailers weaker. The stock price of Emart, which hit 300,000 won ($254.42) in 2018, traded at 141,000 won on Thursday.

If Emart doesn’t attract millennials who are more familiar with online stores, the future is not guaranteed, says Chung Yong-jin, Shinsegae vice president.

In order to overcome the crisis, Chung believes the key is to get customers to stay in the stores as long as possible. Chung recently emphasized to executives and staff that in order to bring customers to offline, they must provide a joyful experience in the store.