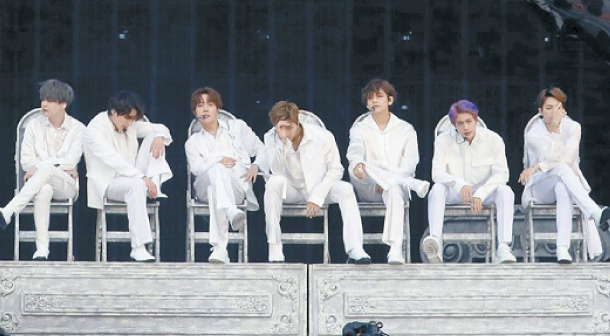 The Japanese leg of BTS’s world stadium tour brought out a total of 210,000 fans in Japan over the course of four concerts during July.

Big Hit Entertainment announced on Monday that the septet’s performances in Osaka and Shizuoka were seen by around 210,000 fans. The two shows at the Osaka Yanmar Stadium Nagai were held on July 6 and 7, and the Shizuoka Stadium Ecopa shows were on Saturday and Sunday.

While the concerts were filled with some of BTS’s biggest hits, the two shows in Shizuoka saw the biggest reaction yet, when the band performed the Japanese version of “Boy With Luv” (2019) live for the first time in front of a Japanese audience.

The Japanese version of “Boy With Luv” was released on July 3 in Japan.

Sunday’s performance was also broadcast live at 277 cinemas in Japan through a session dubbed “Live Viewing.”

“We thank ARMY, who have supported us from our debut to our latest album,” the band said on stage during the Sunday show.

“Being with ARMY is the best time that we can have. We are so happy that you are here to enjoy the performance. We will never forget this moment.”

Meanwhile, BTS will also become not only the first Korean act, but also the first non-Arabian artist to hold a stadium show in Saudi Arabia, according to Big Hit Entertainment.

The agency announced on Sunday evening that BTS will perform on Oct. 11 at the King Fahd International Stadium, “the first time for a foreign artist to hold such a large audience in Saudi Arabia,” according to the agency.

The concert in Saudi Arabia will join the list of performances held in eight cities around the world, for a total of 16 performances. Thus far, the tour has made stops in Los Angeles, Chicago, New Jersey, Sao Paulo, London, Paris, Osaka and Shizuoka since May.

BTS will wrap up its world tour with three concerts at Jamsil’s Olympic Stadium in southern Seoul, on Oct. 26, 27 and 30.