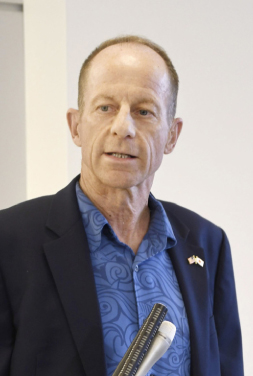 David R. Stilwell, the new U.S. assistant secretary of state for East Asian and Pacific affairs, kicked off a visit to Seoul Tuesday, days after a trip to Tokyo, drawing interest on what message Washington may bring on escalating tensions resulting from Japan’s recent export restrictions on Korea.

Kim In-chul, spokesman of the Korean Foreign Ministry, said in a briefing on Tuesday, “During the meeting, [Minister Kang] is expected to request the United States to play an active role in advancing the Korea-U.S. alliance and the denuclearization and peace process on the Korean Peninsula, as well as on the regional situation.”

Stilwell last week kicked off a four-country trip to Asia, his first visit to the region since assuming his current post. He made a four-day trip to Japan from Thursday to Sunday, then the Philippines before arriving in Seoul Tuesday evening. The last leg of his trip will be Thailand.

Stilwell, who speaks Korean, Chinese and limited Japanese, previously served in the U.S. Air Force for 35 years and served as the Asia adviser to the chairman of the Joint Chiefs of Staff.

In an interview with Japan’s public broadcaster NHK last Friday, Stilwell said that Washington does not plan to “mediate” between Seoul and Tokyo over the export restriction dispute.

“The U.S. position on alliance issues is that we need to do whatever we can to keep these alliances strong and to prevent gaps, seams, fissures between our strongest allies in Northeast Asia,” said Stilwell in a State Department transcript of the interview.

He said that the United States “encourages Korea and Japan to focus on the positive aspects of the relationship,” and for “both sides to sit down and talk and find a positive way out from this current situation.”

Stilwell added he will not “engage” in the issue other than to “encourage both sides to focus on the key issues in the region, especially with North Korea,” adding allies having tensions “is not very helpful.”

However, there is interest in seeing if Washington may step up to play some role as Seoul and Tokyo’s bilateral relations are quickly deteriorating, especially after Japan imposed tighter restrictions on exports to Korea of three key materials used in semiconductors and displays on July 4.

Stilwell also told NHK, “There’s a diplomatic solution to this.”

Tokyo is claiming that it cannot trust Seoul and suggested the export restrictions were in response to South Korea’s poor management of strategic goods and possible violation of sanctions against the North - which Seoul has denied. Japan has warned that more export restrictions may be on their way. But the diplomatic spat comes as Japan has fiercely protested the Korean Supreme Court rulings last year requiring Japanese companies to pay compensation to Korean victims of forced labor during World War II, recognizing the illegality of Japan’s brutal colonial rule over the peninsula.

Seoul has engaged in a flurry of diplomacy with Washington, including a surprise visit by Kim Hyun-chong, the deputy national security adviser, to the United States last week. Korean Foreign Ministry officials led by Yun Kang-hyeon, the deputy minister for economic affairs, also made a visit to Washington from last Thursday to Saturday and held talks with Matthew Pottinger, senior director for Asian affairs of the White House National Security Council (NSC), and Allison Hooker, the NSC’s director for Korea.

A South Korean Foreign Ministry senior official told reporters Monday that Washington effectively warned tensions between Seoul and Tokyo should not affect their bilateral General Security of Military Information Agreement (Gsomia) up for renewal next month.

The official also said that Washington officials stressed there should be “no cross-contamination whatsoever” between the economic sector and security sector.

The deadline for Seoul and Tokyo to decide whether to extend their bilateral information-sharing agreement is Aug. 24. Washington has emphasized trilateral security cooperation with Seoul and Tokyo, especially as the Trump administration pushes its Indo-Pacific Strategy, seen as a policy to contain China.

Choi Hyun-soo, a spokesperson for the Korean Ministry of National Defense, indicated in a briefing on Tuesday that the bilateral Gsomia is expected to be automatically renewed, saying, “There has been no big problem until now, and there has been no change in our position.”

“We look forward to assistant secretary Stilwell’s visit to South Korea as it comes at an optimal time, after President [Donald] Trump’s visit at the end of June,” said Foreign Ministry spokesman Kim, and “look forward to strengthening the Korea-U.S. alliance through consultations across various levels.