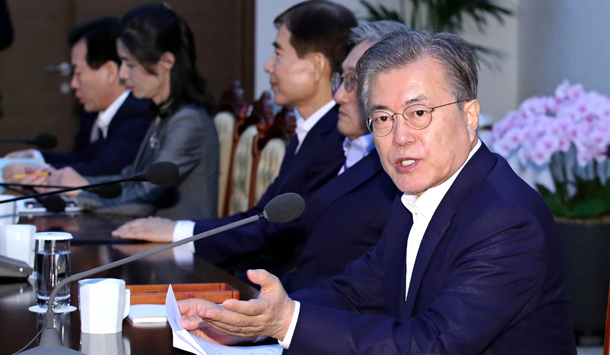 At a meeting with his senior secretaries in the Blue House Monday, President Moon Jae-in remarks on Japan’s export restrictions on three key materials needed to produce semiconductors and displays. [JOINT PRESS CORPS]

The 56-year-old Russian chess player Garry Kasparov said that there is no other sport like chess where asking oneself questions is important and every move has a certain result. In his 2008 book, “How Life Imitates Chess,” he wrote that if you don’t constantly ask yourself whether a move fits your strategy, you cannot defeat a chess player with a consistent plan. It is the essence of a thinking sport.
But Kasparov was defeated by IBM’s supercomputer Deep Blue in 1997. After the loss, he said that he felt like intelligence of a new level was sitting on the other side.

The ever-changing chess strategy is compared to diplomacy, largely because of American diplomat Zbigniew Brzezinski (1928-2017). The Polish-American diplomat had taught at Harvard and Columbia and served as the National Security Adviser in the Carter Administration. In his 1998 book “The Grand Chessboard,” he compared the Eurasian continent to a chessboard. From the perspective of the United States trying to maintain global supremacy after the Cold War, he proposed geopolitical strategies. In the preface, he wrote, “For my students-to help them shape tomorrow’s world.” He wrote that the United States should have an anchor in the Far East and forecast that interactions among the three powers of the United States, China and Japan would create a dangerous regional equation.

More than 20 years later, the geopolitical chessboard has become an equation of such complexity that even AlphaGo would find it hard to solve. China has become far stronger than Brzezinski’s expectations and Korea rejects dependent variables. Japan is brandishing economic restrictions because of the Korean Supreme Court ruling. President Moon Jae-in is standing on the chessboard armed with little more than rhetoric. To fight with moves rather than verbal arguments, you should be open minded to criticism and advice and ask questions again and again. The first move was made by the enemy, but the game is not over.