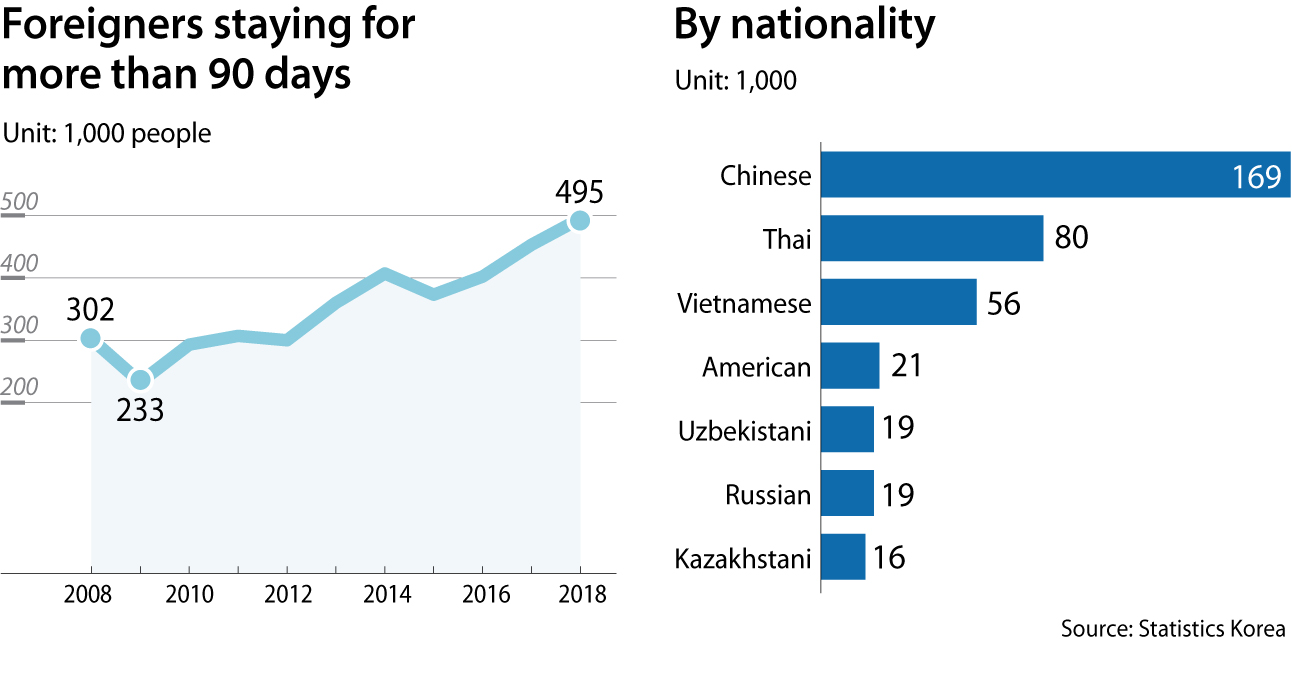 More foreigners than ever are entering Korea and staying on, many with the aim of settling down and pursuing their dreams.

The Winter Olympic Games hosted in PyeongChang last year and the growing popularity of K-pop are increasing the country’s brand recognition and contributing to the inflow of foreigners.

According to Statistics Korea on Thursday, last year 495,000 foreigners entered Korea and stayed for more than 90 days. While that figure includes people coming in on tourist visas, that subcategory is only 6 percent of the total.

The total is up 9.4 percent from last year and an all-time total.

The number of foreigners leaving the country also reached an all-time record. Last year, 365,000 foreigners living in Korea for more than 90 days departed, which is a 4.7 percent increase from 2017 or 16,000 more.

Among the foreigners, Chinese accounted the most, at 169,300, followed by 80,000 Thais and 56,000 Vietnamese. Visitors from the three Asian countries accounted 61.7 percent of total number of foreigners entering Korea with plans for an extended stay.

The number of Mongolians arriving for extended visits dropped 2,000, while 1,000 fewer Cambodians came.

The report found that among Chinese visitors, 28 percent came to Korea for employment purposes, while for Vietnamese the more popular reasons were to study or for training.

The statistics agency cited the growing interest in Korean pop culture as one of the reasons why young Vietnamese traveled to Korea to study.

But the statistics agency said in the case of Thailand, while they have entered the country on short-term visas that allow them to stay for only 90 days, many have not left Korea, becoming illegal immigrants.

“Most of the foreigners coming on short-term visas are supposed to stay for only 90 days,” said a Statistics Korea.

“But once they stay for more than 90 days, they are categorized as illegal aliens.”

Other reasons for long-term stays included immigrating to Korea and as well as marrying Koreans.

The study found that the majority of people coming to stay in Korea were men and that many of the foreigners who traveled to Korea were young people in their 20s. Last year, 269,000 foreign men came to Korea and stayed for more than 90 days, 54 percent of the total.

The number of both men and women coming increased by more than 9 percent when compared to the previous year.

By age, those in their 20s accounted for the most. Last year 173,000 foreigners in that age group entered Korea, 35 percent of the total. The number of people in their 20s increased 12.3 percent year-on-year.