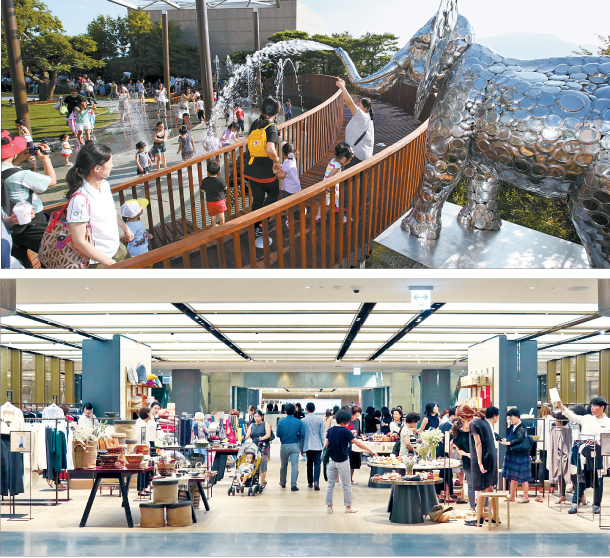 The latest vacation destination is the department store.

Rather than traveling great distances for the holiday, more people just go to nearby department stores to escape the sweltering heat and mentally heal through a variety of activities.

Due to the increasing number of visitors, sales at department stores in July - especially for brand-name products and home appliances - have increased sharply.

Lee Min-young, a 29-year-old living in Seocho District, southern Seoul, did not come up with a travel plan for summer vacation at the end of July. Instead, she decided to visit a department store and buy the luxury bag she wanted.

Kim Min-soo, a 38-year-old Busan resident, goes to the Centum City branch of Shinsegae Department Store near his house around three times a week. Due to the 52-hour workweek, he leaves work earlier than before, so he can spend time with his family at the store.

“If I am home, I have to turn on the air conditioner, and the high electric bills bothers me, but the department store is great because it is not stuffy at all,” Kim said smiling.

July was long considered the off-season for department stores, but it is becoming the peak season, attracting the largest number of customers. Previously, visitor numbers dropped during the month and with those so did prices, with winter clothes sometimes 50 percent off.

But with department stores becoming destinations in their own right, July is becoming busy and lucrative.

The number of department shoppers bears this out. Among the 12 months of the year, July was always 10th place at best until 2015, according to Shinsegae Department Store, but since 2016 the rank moved up. In 2018, July hit the No. 1 spot for the first time, beating the traditional leaders: May, the month of the family, and December, the end of the year.

Customers are not just going to the stores to cool off: They are also shopping.

Shinsegae Department Store sold 13.3 percent more regular discount items, such as those on sale for the season, from June 28 to July 15 when compared to the same period a year earlier. The department store’s turnover in July was lifted by high-end goods, watches and consumer electronics.

“Despite people consuming less, the steady increase in sales of department stores is due to the fact that consumers are polarized [according to class] and a growing number of customers are looking for premium products,” said an executive from the department store industry.

The Busan Centum City branch is currently running a spa, a golf range, its Zooraji Theme Park for kids and an indoor ice rink.

Major department stores are moving events to July in order to draw customers.

Shinsegae Department Store started a Shinsegae gourmet festival, a food event targeting those who spend holidays at the department store. Along with the festival, the foreign famous-brands show, that opens only twice a year, now starts earlier, moving from August to July.

Hyundai Department Store is encouraging visitors to rest in the store and escape the hot weather outside. Discounts are offered and an event is held after 6 p.m.

“July was typically a tough time for department stores, but now it has become a place to have fun during the hottest season,” said an executive in charge of business strategy at Shinsegae Department Store.

“We are planning to actively open various events and promotions.”