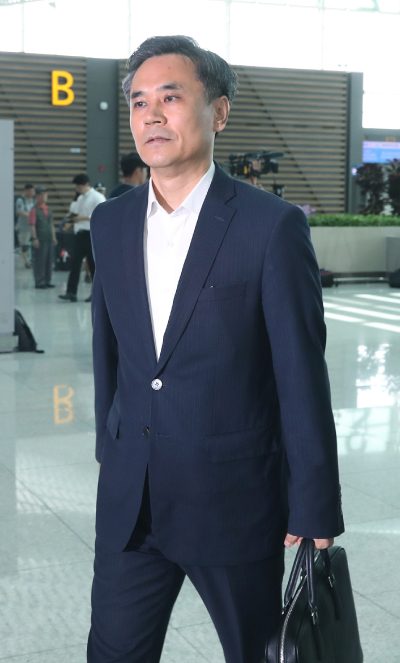 Since Korea first reported Japan’s measures to the WTO on July 9, Korean officials will dispute the restrictions at the trade body’s General Council meeting in Geneva today.

The discussion will focus on Tokyo’s decision to tighten exports to Korea of three industrial materials - hydrogen fluoride, fluorinated polyimide and photoresists - used in semiconductors and display production. The restrictions went into effect on July 4.

“We will explain that Japan’s measures do not comply to the WTO spirit and that they likely violate WTO standards, and we will emphasize the need to have them revoked,” said a Ministry of Trade, Industry and Energy official Monday.

The ministry has previously argued that Tokyo’s measures violate Article 11 of the General Agreement on Tariffs and Trade (GATT), which limits restrictions on exports.

Although the General Council is the highest decision-making body in the organization, a resolution will not be sought in today’s discussions. It will simply provide a venue for Seoul and Tokyo to explain their cases and argue for support of their positions.

Korea, which requested the discussions, will be the first to present its position, followed by Japan.

“The purpose of attending the General Council meeting is … to point out the problems with Japan’s measures,” the official explained. “Measures to enforce a decision, such as a revocation, require the filing of a complaint to the WTO.”

Although Korea has warned Japan it will take action through the WTO’s dispute settlement process, it has yet to take any formal steps.

The senior trade official explained that the WTO meeting could serve as a preliminary process that leads up to the dispute settlement action.

Seoul will be represented by Kim Seung-ho, chief of the office of international trade and legal affairs.

The Trade Ministry explained that Kim was dispatched given the importance of the issue. Paik Ji-ah, Korea’s ambassador to the UN, usually attends General Council meetings.

Kim, who originally served as a diplomat, is a veteran of trade disputes, recently having led Korea’s successful appeal to the WTO for an import ban on seafood from Fukushima, Japan.

The Trade Ministry said it expects the trade body’s meeting on the export restrictions to end today, adding that it could be extended to the next day if more discussions are needed.

The trade row is expected to become drawn out as Tokyo will likely remove Seoul sometime next month from its list of countries that receive preferential trade treatment. If taken off the list, more Japanese exports to Korea would be restricted. Japan will be accepting opinions on the matter through Wednesday.

Seoul has attempted to organize talks between senior trade representatives to defuse tensions. However, Tokyo has not responded.

The Trade Ministry questioned Japan’s claim that Korea’s export control system is weak, explaining that Japanese officials never brought up the issue when the two sides met in recent years.