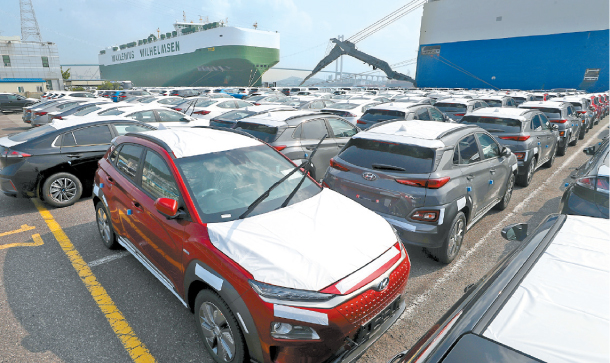 Hyundai Motor vehicles parked at a dock in Ulsan waiting to be shipped overseas on Monday. [YONHAP]

Hyundai Motor saw its earnings bounce back in the second quarter this year with its operating profit surpassing the trillion won ($849 million) mark for the first time in seven quarters.

The company’s net profit has been improving this year after a shock net loss in the final quarter of last year thanks largely to strong sales of its newly-released vehicles and changes in the product mix. The carmaker has been focusing on increasing the ratio of more profitable cars like sport-utility vehicles and its premium Genesis branded cars. 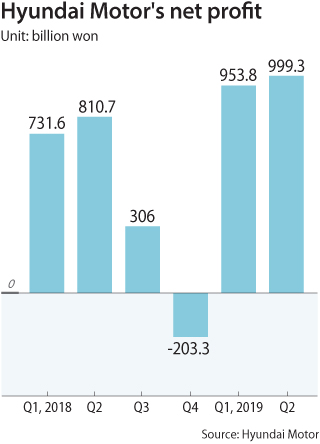 According to Hyundai, it sold 1.1 million cars globally in the second quarter, which is 7.3 percent less compared to the same quarter last year. Despite the sales decline, the company was able to see an increase in sales and profit thanks largely to the changed product mix and favorable foreign exchange rates, it said in a statement.

“With an on-going global trade war and economic slowdown, the overall auto market was weak in the second quarter,” said Choi Byung-chul, chief financial officer at Hyundai Motor, during the conference call. “However, the release of new cars like the Sonata sedan and favorable sales of SUVs improved our profits.”

Choi added that the carmaker is headed for a positive second half of the year with the first SUV under Hyundai’s luxe brand Genesis to hit the market later this year.

The carmaker is also expecting sales of the popular Palisade SUV and recently launched Venue SUV to lift up earnings through the latter half of the year. The Palisade SUV, the largest of Hyundai’s SUV lineup so far, has proved popular in the local market with demand surpassing supply. The SUV rolled out in the U.S. market just last month, and Hyundai is expecting favorable sales results in America as well.

Though earnings have improved, Hyundai’s sluggish business in China remains a headache for the automaker.

Car sales in China plummeted by 35.1 percent year on year in the second quarter, Hyundai said.

Koo Za-yong, head of investor relations at Hyundai Motor, said the company has already suspended production at Plant 1 in Beijing, one of five factories it operates in China, to reduce costs, and is focusing on improving its dealer networks.

Apart from selling cars, the automaker said it will also speed up its transition into becoming a mobility solutions provider by fostering connected car and car-sharing businesses. It has already partnered with car-sharing companies, including Grab and India’s Ola, to enter the mobility business.