Many options on the table, Kyobo Life chief says

Many options on the table, Kyobo Life chief says 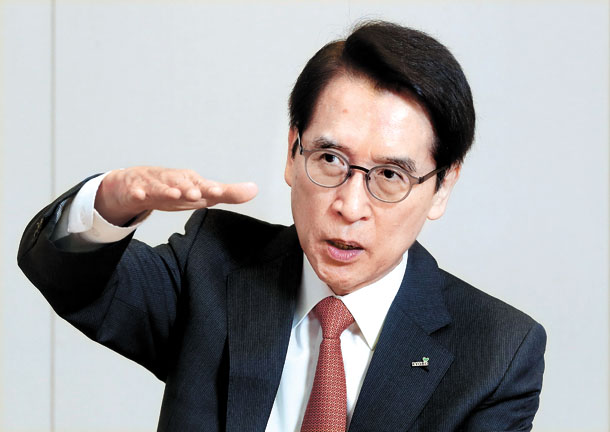 The chief of Kyobo Life Insurance said that a wide range of options remain to resolve a dispute with investors over their exercise of a put option and Kyobo’s delayed initial public offering (IPO).

“All possibilities are open,” said Shin Chang-jae, CEO and chairman of Kyobo Life Insurance. “It could be attracting a third-party investor or purchasing the shares. An IPO could be another option.”

The remarks are the first official comment since the life insurer was ensnared in a controversy with a consortium led by Affinity Partners, which holds a 24.01 percent stake in Kyobo.

It started last October when the Affinity-led group decided to exercise a put option to sell the stake worth around 2.12 trillion won ($1.8 billion).

A put option is a financial instrument that gives an owner the right, but not the obligation, to sell an asset at a specified price by a predetermined date to a given party.

The two parties failed to agree on the price Kyobo should pay under the deal, with the investor group demanding 409,000 won per share.

The CEO countered with some possible deal structures: the issuing of asset-backed securities, selling to the third party or making up the differences after a planned IPO. But no agreement was reached.

The investors, including Affinity and IMM Private Equity, took the case to the Korean Commercial Arbitration Board in February.

Faced with growing friction, Shin sought an amicable settlement with the counterparty.

“A more important matter than winning in the case is whether the investors could get paid in a satisfactory manner,” he said, “My top priority is to let them exit as soon as possible at an appropriate price. It is not about winning or losing in arbitration.”

The possibility of a third party remains.

“There have been some investors interested in the stake, but [I] found it tough to make a deal since there was a great discrepancy between the price demanded by the financial investors and the interested party,” he said.

Kyobo’s attempt to take itself public has been put on hold since the regulators won’t even begin the IPO process if any major disputes are pending with investors.

But Shin vowed to stick with the company’s plan to go public.

“The IPO has been suspended due to the put-option issue, but it doesn’t necessarily mean that we have given up on the IPO,” he continued, “The decision of the board of directors is valid, and we are on track to go ahead with the IPO.”

The IPO is a flash point between Shin and the investor group.

An agreement made in 2012 entitled the consortium to exercise a put option if an IPO didn’t take place by September 2015. As the plan was delayed, investors claimed losses because of the postponement.

Regarding the agreement, Shin said that “I didn’t specifically promised an IPO in the terms, rather [I] pledged to make best efforts in line with the rights, responsibilities and role as the top shareholder.”

He said that the economic environment was hostile for Kyobo’s IPO, with low benchmark interest rates and tougher regulations on fiscal soundness.

“Since there was no specific guideline for fiscal soundness, we didn’t know how much [the company] should raise,” the CEO said. “But when adopting the standard used in Europe, the amount was estimated at over 10 trillion won. It took 60 years for Kyobo Life Insurance to accumulate 10 trillion won of capital. So, it is impossible to bring in 10 trillion won overnight. We couldn’t just go for the IPO, especially at a time when the stocks of life insurance companies were undervalued, which means that the capital that the IPO could attract was not that much.”

His concerns resonate across the insurance industry as all insurance companies will be required to increase their capital under the new IFRS17 accounting standard and a fresh regulation aimed at strengthening fiscal health, due to come into effect in 2022.

This is also why Shin emphasizes a more flexible approach in arriving at a timetable for the new regulations.

“From the perspectives of the insurance industry, the impact could be great if the new accounting standard and tougher requirements for fiscal soundness go together,” he said. “I hope that the authorities will facilitate a ‘soft-landing’ of the industry. I am not asking for a special favor, but am just requesting the pace and degree take place in a comparable manner with other countries.”

The company head is known for a cautious management style, and some say that the approach played a role in triggering the disagreement with the investors.

One of the best-known cases was the withdrawal of the acquisition of Woori Bank.

“At the time, we competed with Anbang Insurance,” he said. “Even if we win the race with higher price tags, our financial status could be at risk.”

The corporate culture that emphasizes stable growth over dramatic expansion affected the decision.

Another concern, as the CEO of an insurance company, is a slowdown in the economy.

“I was concerned long before. We made it official with a gloomy outlook during the 2012 founders’ ceremony.” Shin continued, “It is typically a day for ceremonial words, but the company faced headwinds, including low interest rates and the government’s push to tighten regulation. So, I said that we should shift focus from growth to profit making.”

Although the ongoing tensions pose challenges to the company head, he vowed to navigate them.

“I want to make the company great and stick to principles,” Shin said. “And we will just behave like a financial company, a life insurer, or a business operator. With the focus on clients, we will make money. I am more interested in establishing a good company rather than big one.”