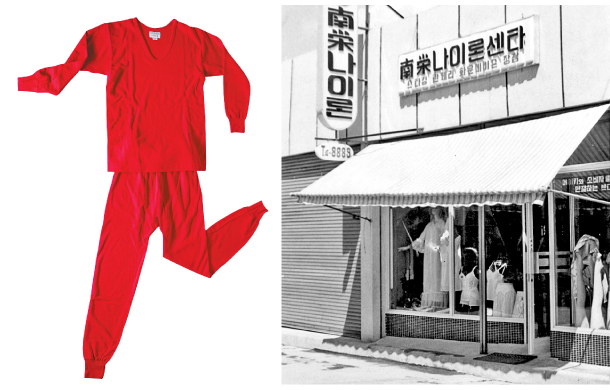 Left: Traditional red long underwear. Right: At a Namyeung Vivien store in the 1970s, mannequins with a variety of underwear items are displayed. [JOONGANG ILBO]

Korean underwear makers are in trouble.

It has long been tradition for sons and daughters to give red long underwear to their parents as a symbolic gift when they receive their first monthly salary. Since houses were not heated well in the past, long johns were the best present for offering warmth and coziness.

Back then, wearing an airy ramie-fabric T-shirt was standard during the sweltering hot summer. Beneath the shirts of our fathers, there was always an immaculate white undershirt.

But now, the domestic makers of red two-piece underwear and ramie-fabric undershirts are in a crisis.

Although the brands are seared into the collective consciousness of Koreans, the market has slumped due to the low birthrate and weak domestic demand.

Trends are taking their toll as well. Fashion companies like Uniqlo are price competitive and have been boosted by the internet.

Namyeung Vivien, founded in 1957, is one of the local underwear companies being hit by the market.

According to sources, it is now under supervision, and the stock of the controlling shareholders is being sold off. The object is to find buyers for the 75.88 percent of the company owned by Chairman Nam Seok-woo and family members, as well as affiliates.

The chairman owns 23.79 percent of the company.

Namyeung Vivien announced on Tuesday that nothing has been decided yet and that it would update the public when it has some news.

The hardship experienced by local underwear makers is attributed to the market structure, where many companies fight for a piece of a small pie. It is a crowded space, with local and foreign retailers, fast-fashion companies and outdoor goods makers.

On top of all that, distribution companies are getting into the act with their own brands, and new lines are coming to market often pitched on TV shopping channels.

Wonderbra entered the Korean market in 2009.

This expansion is reflected in the income statements of local brands. Namyeung Vivien, which led the women’s underwear market in Korea for years, recorded 206.1 billion won ($174 million) of sales and a 3.9 billion won operating loss in 2018. That compares to 290.4 billion of sales and a 500 million won profit in 2017.

In an effort to stage a comeback, the company reduced the number of employees from 393 in 2017 to 236 in 2018 and also sold off assets, including a factory located in Yeongdeungpo District, western Seoul.

Others are also suffering. Shinyoung Wacoal experienced major operating losses in 2018 and 2017. Goodpeople, which sells under the Bodyguard brand, experienced 4 billion won of losses from 2016 to 2017, but achieved a 2.5 billion won operating profit in 2018 by cutting manufacturing costs. Ssangbangwool has also been losing money.

“One of the factors that contributed to the crisis is the old-fashioned image of Korean underwear brands, which did not cater to the young people’s taste,” said an official from the industry.

“Korean brands are having more difficulty since several new brands are emerging as underwear is now considered a fashion item and consumers are buying fewer clothes due to recession.”