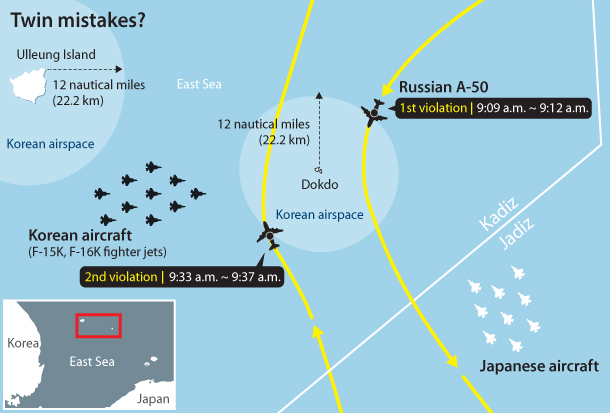 A Russian military attache expressed “deep regret” for a Russian military plane’s violation of Korean sovereign airspace Tuesday, which he attributed to mechanical error, according to Korea’s presidential office on Wednesday.

In a press briefing, Yoon Do-han, the Blue House senior presidential secretary for public communications, said a deputy military attache from the Russian Embassy visited Korea’s Defense Ministry on Tuesday afternoon to explain Moscow’s position on a Russian A-50 airborne early warning and control aircraft penetrating Korean airspace over the islets of Dokdo that morning.

Three Russian military planes - two Tu-95 bombers and the A-50 - entered Korea’s Air Defense Identification Zone (Kadiz) early Tuesday, and the A-50 veered into Korean sovereign airspace twice in almost 30 minutes, prompting the Korean Air Force to respond with a total of 360 rounds of warning shots from fighter jets deployed nearby.

Requesting information like the time, location and available footage of the incident from Korea, the Russian official said Moscow would undertake an immediate investigation into the incident.

“Russia respects Korea’s domestic laws, as well as international law,” the attache said. “There was no intention to violate [Korea’s airspace]. Separately from this incident, Russia hopes to improve relations with Korea.”

According to Yoon, the official added the penetration of the Russian plane into “unplanned territory” appeared to be the result of a technical error and was not part of the combined air exercises the Russian planes were conducting with two Chinese H-6 bombers, all of which entered and left the Kadiz earlier that morning.

Yet the attache’s explanation and ostensibly penitent response have not been echoed by Moscow, whose Defense Ministry on Tuesday angrily denied that its plane had entered Korean airspace and instead blamed Seoul for “acting dangerously” with its warning shots against the two Tu-95 bombers, though no mention was made of the A-50 plane.

In a televised statement, Lt. Gen. Sergey Kobylash, commander of Russia’s Long-Range Aviation, claimed that the closest a Russian plane got to Korean territory - the Dokdo islets - was 25 kilometers (16 miles), and that the response shown by Korean F-15K and KF-16 fighter was “illegal and dangerous.”

According to Korea’s Joint Chiefs of Staff, the Russian A-50 plane reached as close to 8 miles east of Dokdo when it violated Korea’s national airspace, followed by a second time when it reached as close to 9.8 miles west of Dokdo. It flew in Korean skies for a total of seven minutes and was the first case of a foreign military aircraft violating Korea’s sovereign airspace since the 1950-53 Korean War.

The incident prompted Blue House National Security Adviser Chung Eui-yong to issue a strong complaint to Nikolai Patrushev, secretary of Russia’s Security Council. Seoul also summoned the charge d’affaires from the Russian Embassy in Seoul, Maxim Volkov, and Chinese Ambassador Qiu Guohong to its Foreign Ministry to protest the entry of their planes into the Kadiz.

Both countries said they did not recognize the Kadiz as Korea’s territorial airspace, with China’s Foreign Ministry saying the area was free for all countries to navigate.

Air defense identification zones, known by their initials ADIZ, are, in fact, unilaterally set by countries, aren’t subject to international treaties or agreements and are larger than traditional national air spaces.

Korea’s Defense Ministry on Wednesday said it received the protest from Moscow, and said it would present evidence proving the Russian plane had indeed violated Korean airspace in future talks.

According to military sources, the Korean Air Force has video footage clearly showing the A-50 Russian surveillance plane within Korean airspace taken from gun cameras and digital video recorders on the fighter jets it deployed to the scene.

Given the wider implications of increased military coordination between Russia and China, the United States gave its support to Korea over the incident, with the Pentagon saying it stood by Korea in its responses to the “air space incursions by Chinese and Russian aircraft.”

Tuesday’s incident took place as Russia launched its first long-range combined air patrol exercise with China, which Moscow’s Defense Ministry said had the aim of “further increasing cooperation between our armed forces, and of perfecting the capabilities to carry out joint actions and of strengthening global strategic security.” The two countries have also been stepping up arms trading, with China recently buying $2.5 billion worth of combat aircraft amid rising tension with the United States in the Pacific.

Perhaps in a careful bid not to alienate either of its allies in Northeast Asia, Washington also afforded the same support in the incident toward Japan, which claims the Dokdo islets as part of its territory.