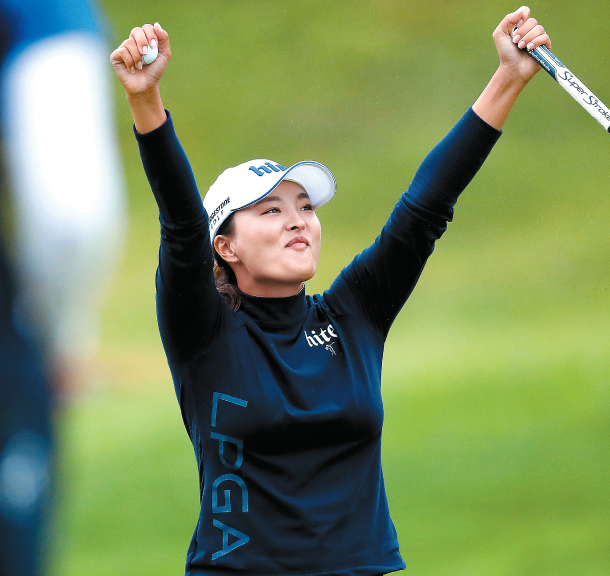 Korean golfer Ko Jin-young won the Evian Championship for her second career LPGA major title, booking a return to the top of the world rankings in the process.

Ko won the fourth major tournament of the 2019 season at 15-under 269 at the par-71 Evian Resort Golf Club in Evian-les-Bains, France, on Sunday, beating three players, including fellow Korean Kim Hyo-joo by two strokes.

Jennifer Kupcho of the United States and Feng Shanshan of China also finished at 13-under.

This is Ko’s fifth LPGA win and second major of her career. She won the ANA Inspiration in April this year. Ko, the 2018 LPGA Rookie of the Year, now has a tour-high three wins in 2019.

Korean players have won three of four major titles so far this year, with Lee Jeong-eun winning the U.S. Women’s Open in June.

Ko began this week at No. 2 in the world rankings, one spot behind fellow Korean Park Sung-hyun. But with the combination of Ko’s victory and Park’s sixth-place finish, Ko will return to No. 1.

Ko dethroned Park as No. 1 in April following her win at the ANA Inspiration. Ko stayed there until June 30 before Park snatched the No. 1 ranking again. Ko will return the favor when the new rankings are announced Monday.

Ko extended her lead in the Player of the Year points race. She entered this tournament leading American Lexi Thompson 129-104. Tournament winners earn 30 points, and points are doubled at majors. Thompson missed the cut at Evian.

Ko began the final round tied for third with Korean player Park In-bee at 11-under, four strokes behind another Korean, Kim Hyo-joo. Park Sung-hyun was at 14-under. Ko was in the final group with Kim and Park Sung-hyun.

From that trio, Ko was the only one to shoot under par in the final round, with Park Sung-hyun stumbling to a 75 and Kim Hyo-joo, who held the lead for a stretch on the back nine, faltering with a triple bogey at the par-3 14th en route to a 73.

Ko held steady with five birdies and a bogey, staying on her feet with other contenders falling by the wayside.

Kupcho came out of nowhere for a bogey-free 66 but ran out of holes. Feng settled for par on the par-5 18th, when a bogey would have given her the club house lead at 14-under and put more pressure on Ko coming down the stretch.

Ko had two birdies on the front nine and held steady on the back nine, trading three birdies for a bogey to limit the damage on a rainy day.

This was the 10th LPGA win by a Korean player this year, with three by Ko. The Korean contingent combined for nine wins all of last season.

The fifth and final major tournament of the year, the AIG Women’s British Open, will start Thursday at Woburn Golf Club in England.