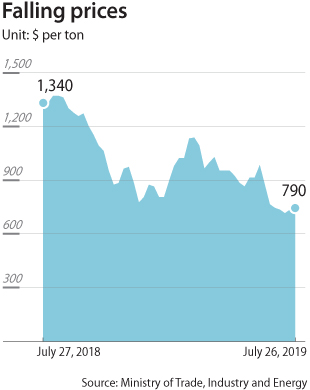 As ethylene prices fall to their lowest level since the 2009 global financial meltdown, the local petrochemical industry is reporting far worse profits for the second quarter compared to a year earlier.

Their losses are expected to continue throughout the year.

According to data from the Ministry of Trade, Industry and Energy, the price of 1 ton of ethylene fell to $761 last month, nearly half of the $1,380 posted on Aug. 17 last year. Although prices had remained above $1,000 per ton until last year, they started falling in January, averaging $934 that month.

According to analysts, Lotte Chemical’s operating profit for the second quarter will be around 364 billion won, down 48 percent from a year earlier. They believe the situation for Hanwha Total will be similar.

Industry sources blame oversupply from North America. They say U.S. chemical firms are producing more and cheaper ethylene from shale gas, while demand for ethylene has remained the same as trade conflict between Beijing and Washington continued.

“Prices for raw materials dropped as the shale gas supply significantly increased, which contributed to the oversupply of ethylene and the resulting price fall,” an industry source said.

Analysts are lowering their profit estimates for local petrochemical companies and remain pessimistic about their share prices.

“We are lowering Lotte Chemical’s operating profit estimate for this year by 8 percent to 1.3 trillion won,” said Lee Do-yeon, an analyst at Korea Investment & Securities.

“This decision is largely based on changes in the company’s share price over the past five years and the decreasing spreads in its ethylene business.”