May births down 9.6%, fewest ever in month

May births down 9.6%, fewest ever in month 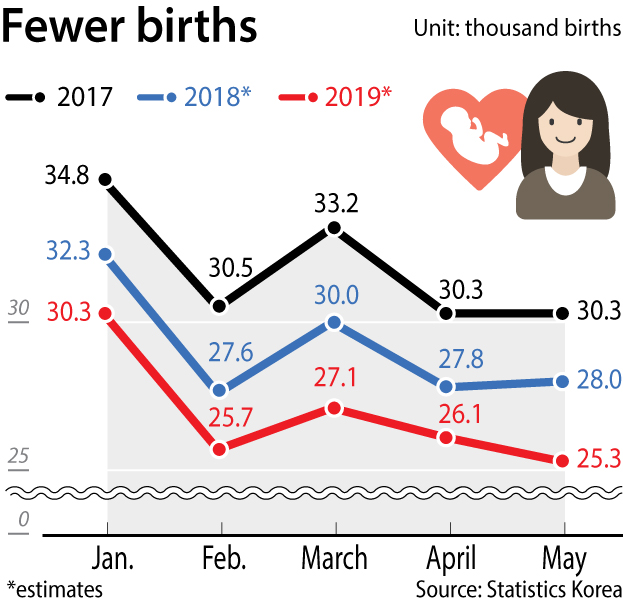 The number of newborns in Korea keeps declining, with births plummeting to the lowest-ever level for May.

Statistics Korea reported Tuesday that the country recorded 25,300 births in May, a 9.6 percent fall from the same month the previous year. This is the 42nd consecutive month of on-year declines since December 2015. Through May this year, the number of births was at 134,500, a 7.6 decline from 145,600 recorded the same period in 2018.

Korea faces a population crunch as the number of marriages and births have sharply fallen in recent years, while the number of single households keeps increasing.

According to the statistics agency’s data, the number of marriages this year through May was 102,200, an 8.6 percent decline from the same period a year earlier.

Births fell across the board in major cities, with Gwangju recording the largest decline through May this year, falling 14.3 percent. Births in the capital city fell 6.6 percent over the period, while in Busan the figure dropped 12.6 percent.

Sejong was the only major city to record a growth in the number of newborns.

The statistics agency also reported that the number of deaths in May was 24,700, a rise of 2.9 percent from the previous year.