SNUH, which became the first Korean hospital to manage a hospital overseas in 2014, also recently received a perfect score from SKSH for its management of the hospital.

SKSH is a nonprofit public hospital established by UAE President Sheikh Khalifa bin Zayed. The facility covers 65,000 square meters (77,739 square yards), has 246 beds for patients and specializes in treating cancer, cardiovascular diseases and neurological disorders. The hospital has a staff of 784 people from 31 countries, which includes 51 doctors, 43 nurses, 22 medical technicians and 12 administrative workers dispatched by SNUH from some 15 hospitals in Korea.

The hospital’s facilities and specialized staff have been successfully attracting patients from across the country since SNUH took over its management. The number of outpatients being treated at the hospital increased from 18,745 in 2015 to a staggering 103,602 last year. During this period, the number of surgeries performed also increased from 311 to 1,981. 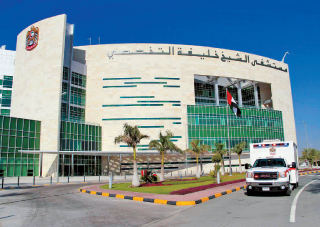 “When a patient is rushed into the emergency room and sees no Korean specialists are present, they complain,” said Sung Myung-whun, the CEO of SKSH and a former president of SNUH’s Gangnam Center in southern Seoul. “Ten percent of UAE residents who go overseas to countries like the United States or Korea to receive medical treatment return back to their homeland and come to this hospital.”

A Korea-based SNUH worker said that the hospital expects SKSH’s economic impact will reach 2 trillion won ($1.6 billion) in the next 10 years. Its economic impact is not limited to maintenance costs and personnel expenses; it also contributes to exporting medical equipment from Korea like picture archiving and communicating systems, the worker added.

SKSH hosted a ceremony marking the hospital’s fifth anniversary on Tuesday, attended by figures from both countries including Dr. Abdulhadi Al Ahababi, the deputy director general of the medical office of UAE, Kim Yon-su, the president and CEO of SNUH, and Oh Se-jung, the president of Seoul National University.

“Seoul National University Hospital and SKSH staff were the ones that fully supported and dedicated themselves to the successful operation of SKSH,” said Dr. Abdulhadi in the event. “Only can teamwork, with a leader who trusts and guides its members, realize such achievement, and I am pleased that Seoul National University Hospital has been the leader throughout the five years of SKSH management.” The UAE recently requested SNUH to participate in a bid to manage another hospital currently under construction in the country.