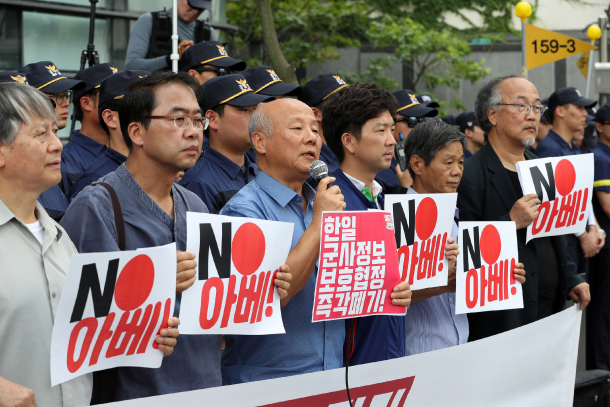 Korean civic groups hold a press conference in front of the Japanese Embassy in central Seoul Thursday to denounce Japan’s dropping of Korea from its so-called white list of trading partners. The association of civic groups announced plans to stage candle-light vigils to condemn the Shinzo Abe administration on Aug. 10 and 15 in Seoul. [NEWS1]

For the first time in 36 days, the Japanese government approved the export to Korea one of three key materials needed to make computer chips and displays. “The EUV (extra ultraviolet) photoresists that were one of the three items that the Japanese government restricted have been approved for the first time,” Korean Prime Minister Lee Nak-yon said on Thursday during a cabinet meeting. “The Japanese government on Wednesday announced tougher regulations including comprehensive approval and export management [against Korea],” Lee said, “But other than the three materials, no other items have been included [in the restrictions].”

In a Thursday press conference, Japanese Industry Minister Hiroshige Seko said the Japanese government approved the export of EUV photoresists after it has confirmed in a review that the material will be used for its intended purposes and not diverted to military purposes.

“It is the first case in which we have found no problems after strict reviews,” Seko said. “It is already approved for export.”

On July 4, Japan made it tougher to export EUV photoresists, citing the possibility of the material being used on missile launchers. Two other critical industrial materials, hydrogen fluoride etching gas and fluorinated polyimide, were also restricted.

Although neither Tokyo nor Seoul disclosed the names of the exporter or importer, the recipient is almost certainly Samsung Electronics.

Photoresists are a key material in the manufacturing of semiconductors. Japan holds a 90 percent global market share in the material, and Korean companies including Samsung Electronics and SK Hynix buy 93 percent of their photoresists from Japan.

Last year $320 million worth of photoresists were imported.

Samsung is the only company that uses EUV photoresists.

It has an EUV semiconductor manufacturing plant in Hwaseong, Gyeonggi that is scheduled for mass production early next year.

Samsung reportedly has secured a stockpile of six to 10 months of EUV photoresists from Belgium.

With Japan approving the export of one shipment of a restricted material, the Korean government suspended its decision on whether to exclude Japan from its own white list of countries given preferential treatment in export procedures.

The issue was planned to be discussed during an economic ministers’ meeting Thursday led by Minister of Economy and Finance Hong Nam-ki.

However, the government decided to hold its decision for now.

Japan is among 29 countries on the list including the United States, United Kingdom, Germany and Australia. They all receive preferential treatment in export processes.

If Japan is excluded from Korea’s white list, it would take a maximum of 90 days for Korean goods to get approval for export.

Japan on Wednesday officially excluded Korea from its own white list of 27 trusted trading partners.