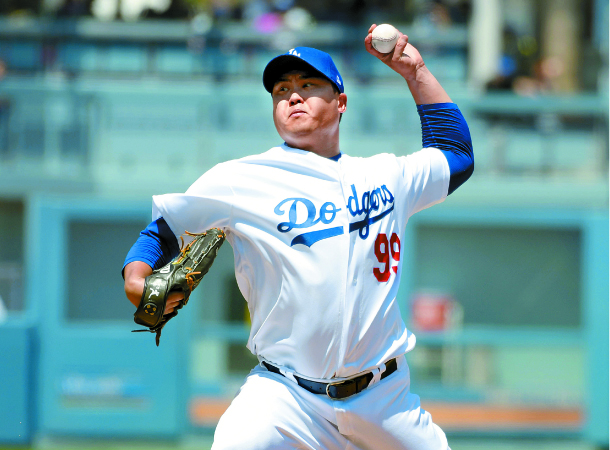 Ryu Hyun-jin of the Los Angeles Dodgers throws a pitch during a game against the Arizona Diamondbacks at Dodger Stadium in California on Sunday. [REUTERS/YONHAP]

Ryu Hyun-jin of the Los Angeles Dodgers picked up his 12th win of the season against the Arizona Diamondbacks at Dodger Stadium on Sunday.

Ryu tossed seven scoreless innings and gave up five hits and a walk while striking out four.

Unlike the past few games when Ryu didn’t get much run support, on Sunday he got plenty. The Dodgers lifted some pressure off Ryu from the first inning, with Justin Turner’s two-run homer and Cody Bellinger’s solo home run setting the Los Angeles team up for a quick lead.

Once Ryu left the mound, the Dodgers’ bullpen gave up three runs, but still won 9-3.

This was Ryu’s first start in 12 days as he was placed on a 10-day injured list due to a sore neck.

With another win, Ryu has now picked up 12 wins and two losses with a 1.45 ERA for this season. In addition to picking up another win, Ryu also improved his batting by adding a hit. This was Ryu’s fourth hit of the season.

Ryu still remains the only pitcher in the major league this season to have his ERA below 2.00. From his low ERA this season, there have been talks about Ryu winning the Cy Young Award, the award given to the best pitchers in the majors.

If Ryu does win the prestigious award, he will become the first Asian pitcher ever to do so.

However, Ryu credited his success to his teammates.

“It’s definitely unbelievable,” Ryu was quoted as saying on the MLB website. “Like I’ve said many times, I don’t think this is all because of myself. There are many people around me, especially my teammates, that have helped me reach that number. My goal is to do what I do and finish the season strong.”

Following the game, Ryu was also highly complimented by his teammate Turner, who also played quite a significant role in helping him pick up a win.

“It’s an absolute display of the art of pitching,” Turner was quoted as saying on the MLB website. “He can pitch to all four quadrants, his command has been great all year. Vintage Ryu. Changing speeds, keeping guys off balance. He’s like Houdini when he gets in trouble, he finds a way out of it.”

In addition to Ryu’s performance this season, the Dodgers, too, are dominant. Having won 79 games and losing 41, the Dodgers are a good 20 games ahead of the National League West’s runner-up, the Diamondbacks. Behind the club’s success, Ryu pointed to the entire starting rotation.

“We’re having an incredible year as a group,” Ryu was quoted as saying. “No one has pitched on a short leash, which means we’re all doing our part. You can look at the stats and the numbers we’re putting up.”

Ryu is having the best season of his career this year. In addition to his low ERA, Ryu started in the Dodgers’ opening game and picked up a win, becoming the first Korean pitcher since Park Chan-ho in 2001 to do so.

Continuing his streak, Ryu also earned an All-Star selection, becoming the fourth Korean major leaguer to do so. On July 9, Ryu added to that accolade by becoming the first Korean pitcher ever to start in an All-Star Game.

This season is also an impressive one for Ryu as this is the first time since his rookie season in 2013 that he has played full-time.

Ryu’s 150 career wins come from his time in both the KBO and the Majors. Ryu has picked up 98 KBO wins and 52 MLB wins since he debuted for the Hanwha Eagles in 2006.