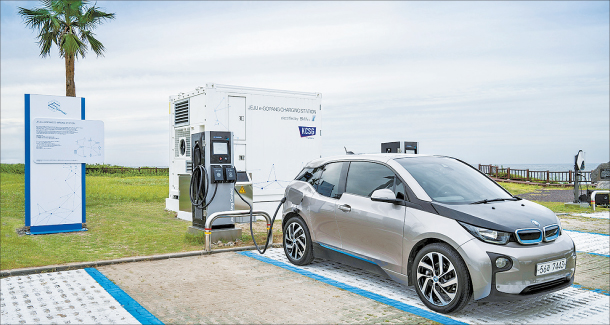 BMW Korea opened the first electric car-charging station in Korea that reuses electric batteries as it strives to carve out its own space in the local e-mobility market.

The Korean unit of the German automaker announced in a statement that the new fueling station, named “e-gopang,” on Jeju Island stores electricity from wind power generators in used electric car batteries. The new facility opened on Monday.

While there are already electric car-fueling stations throughout Korea, e-gopang is the first to use used car batteries as a power storage source.

According to market watcher SNE Research, the global market for electric cars is expected to reach 6.1 million units this year, up 31 percent from 2018. The market is projected to grow 19 percent on average per year to occupy 30 percent of all car sales in the world by 2030.

In competing for the e-mobility market, BMW Korea believes that reusing batteries for fueling stations is a method that other automakers can follow to boost the global electric auto industry.

It claims the recycling method for the e-gopang facility can extend the usage time for electric batteries by 5 years.

The Korean unit said it has specifically chosen Jeju for e-gopang as the island is ahead of other regions in Korea in providing support for e-mobility. It is using used batteries from BMW i3 cars sold in Korea since 2014.

The automaker previously built 30 charging stations throughout Jeju in 2013 and launched an electric car-charging membership program in partnership with Posco ICT in March 2014. BMW also installed 120 stations in 60 Emart branches across Korea the same year.