Josh Lindblom of the Doosan Bears is having the best season of his KBO career. 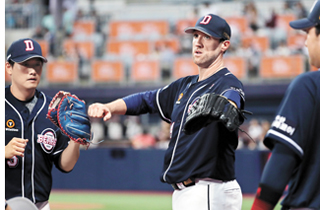 Josh Lindblom of the Doosan Bears, center, celebrates during the fifth inning of a game against the Kiwoom Heroes at Gocheok Sky Dome in western Seoul on Sunday. [NEWS1]

This year, Lindblom is hoping to make history in the KBO as the first foreign player to win the Triple Crown. As of Tuesday, Lindblom currently leads the league in wins, strikeouts and ERA, and is already a likely candidate for regular season MVP.

Most recently on Sunday, Lindblom picked up his 18th win of the season during a game against the Kiwoom Heroes at Gocheok Sky Dome in western Seoul. He gave up two runs throughout six innings, taking his current winning streak to 11 games, since a game against the Samsung Lions at home on May 28.

With another win, Lindblom has picked up 18 wins and a loss with a 1.95 ERA this season.

Throughout the history of the KBO, only three pitchers have ever won three titles in a single year. Sun Dong-yol, formerly of the Haitai Tigers, was the first pitcher to do so. He actually managed to win the Triple Crown four times in his career, in 1986, 1989, 1990 and 1991. Then, Ryu Hyun-jin, now of the Los Angeles Dodgers, accomplished the feat in 2006 and Yoon Suk-min of the Kia Tigers did it in 2011.

However, since foreign players were first introduced in the KBO in 1998, not a single foreign pitcher has accomplished the feat.

Of the three titles, Lindblom is most likely to top the table for wins. Currently, Angel Sanchez of the SK Wyverns is the runner up in this category at 15 wins. Since the two pitchers will probably play about seven more games each in the regular season, it is unlikely that Sanchez will pass Lindblom.

Looking at Lindblom’s current performance, there is a good chance that he will not only tie the record for the most number of wins by a foreign pitcher - 22, set by Danny Rios in 2007 and Dustin Nippert in 2012, both for the Doosan Bears - but may even break it.

In ERA, Lindblom is also the only pitcher to have his ERA below 2.00 this season. Sanchez is once again ranked second in this category at 2.24.

The biggest challenge on the path to the Triple Crown is going to be strikeouts.

Currently, Lindblom is the leader with 142, but Kim Kwang-hyun of the Wyverns is close behind at 138. As the two players’ average strikeout ratio per nine innings is at 8.64 and 8.63, respectively, it’s likely that the winner won’t be determined until the end of the season. The Wyverns have 33 games remaining this, season while the Bears have 34 games left.

If Lindblom does win all three titles, it is highly likely that he will also be named regular season MVP. Although players from the team that wins the regular season normally has a higher chance of being named MVP - and at this stage it is unlikely to be the Bears - winning the Triple Crown may give Lindblom the edge.

Of the four times Sun won the Triple Crown, he was selected as regular season MVP three times. When Ryu achieved the feat in 2006, he became the first player in the KBO to win both the regular season MVP and Rookie of the Year award.

Yoon, who ended up winning four titles by topping the winning percentage, was also named MVP in 2011, despite the Tigers finishing fourth in the regular season.