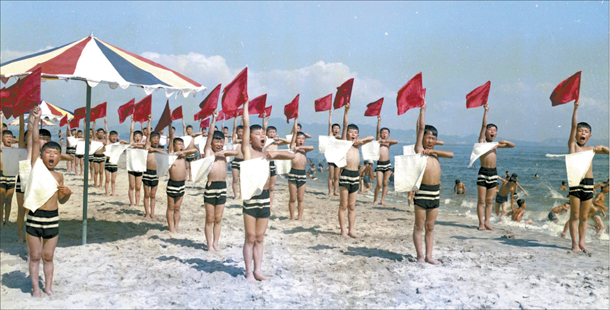 North Korea has always been a subject of international interest, but interest seems to have increased after the meetings of the leaders of the two Koreas and the United States over the past year that have left a mark on history.

Nevertheless, the majority of people around the world, according to Joo Kang-hyun, director of the Korea National Maritime Museum, have little to no knowledge of North Korea. “Generally, South Koreans in their 30s and 40s think they know a lot about North Korea but they actually don’t,” said Joo. “They don’t know where Sinuiju [a city in North Korea] is located, or what kind of people live in those coastal areas of North Korea.”

Since Joo is with the National Maritime Museum, he says he wanted to take the time as an opportunity to show people the seas of North Korea through a special exhibition titled “The Forgotten Other Seas, the Seas of North Korea.” Through some 360 rare paintings, photographs and artifacts, “the exhibit attempts to help visitors learn more about North Korea geographically and culturally,” according to the museum. The exhibition kicked off on July 22 and runs until Oct. 13 at the Korea National Maritime Museum in Yeongdo District, Busan.

“There will be several photographs and paintings of North Korean seas and people near [the waters] that will be shown to the public for the first time,” said Joo. The museum was able to borrow the paintings from individual collectors, as well as from the Council of South and North Korea History Scholars and the Hanns-Seidel-Stiftung.

“The photographs, for example, feature North Korean women selling fish at a fish market in the 1980s,” said Joo, “or North Korean students undergoing trained at Songdowon Beach in the ’70s.”

Many propaganda posters will also be exhibited, said Joo. However, none of the posters should upset anti-North Korean groups.

“The propaganda posters that will be shown at the exhibit will not be those that praise its leader or mock others,” said Joo. “Instead, [they will be] those that encourage [North Koreans] to go out and fish during the cold weather and so on.”

“In fact, there were a lot more rare and unique photographs and paintings that I wanted to show, such as North Koreans mourning the death of Kim Il Sung on a boat,” Joo said. “However, the museum decided not to exhibit them as we did not want this exhibit to be seen as pro-communism or pro-North Korea.”

“The museum simply wants to shed light on the seas and its people and culture of North Korea,” Joo added.