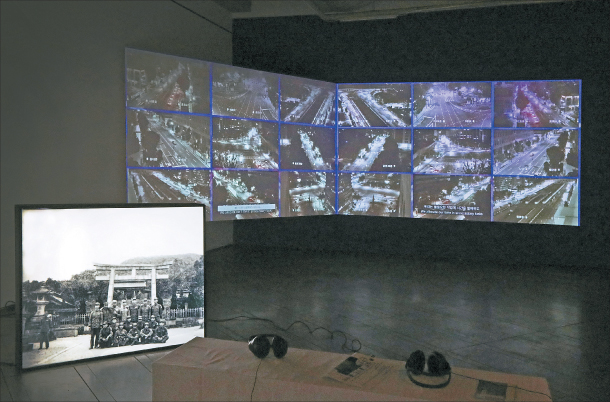 “We are Bound to Meet” at Alternative Space LOOP invites visitors to observe how Taiwanese and Korean artists interpret the shared history of Japanese rule. [PARK SANG-MOON]

The ongoing political and economic dispute with Japan serves as a stinging reminder that Korea faces a long road to recovery from the colonial chapter that ended over 70 years ago.

But Korea wasn’t the only one dealing with Japanese rule in the early 20th century. Japan colonized Taiwan between 1895 and 1945, around the same time it colonized Korea (1910-1945).

While similarities certainly exist, there also seems to be a gap between how Taiwan and Korea experienced and remember Japanese imperialism - one example being that Taiwan still uses the restored headquarters of the Japanese governor-general office to house its president, while Korea demolished the Japanese General Government Building with great fanfare two decades ago.

The exhibition “We are Bound to Meet,” currently ongoing at the Alternative Space LOOP in Hongdae, western Seoul, invites visitors to observe how Taiwanese and Korean artists interpret the shared history of Japanese colonialism and its lasting influences.

“The exhibition title appears romantic but intends to confront and treat the discernible and indiscernible wounds of historical trauma,” Taiwanese curator Jia-zhen Tsai said in an introductory statement. Tsai, who has also exhibited at Berlin and Tel Aviv, is LOOP’S featured curator for the 2019 International Open Call for Independent Curator special exhibition.

“Only by encountering the past, facing people with the wounds of an era and confronting traumas caused by political history can we then become ‘we’ with ‘them,’” she said, adding that this exhibition “will exhibit works related to Japanese colonial history, an era that is now a chapter in our history textbooks, but we have not been able to process the wounds and hurt cast from generation to generation.”

Above left: Liang-pin Tsao’s “Keelung Martyrs’ Shrine” (2016) is shown in a LED light box in his “Becoming/Taiwanese” series. Above right: A capture of Jaeyeon Chung’s “A Sketch for a Foundation” (2019), through which the artist expresses her confused emotions over a now-demolished building built during Japanese rule. [PARK SANG-MOON]

The exhibition, whose full title is “We are Bound to Meet: Chapter 1. Many wounded walk out of the monitor, they turn a blind eye and brush past me,” features video works, photographs and etchings by Sojung Jun, Jaeyeon Chung, Ching-yuan Chen, Fei-hao Chen and Liang-pin Tsao.

The show starts off by setting a tone of anxiety and frustration that characterized the two former colonies during early 20th century imperialism through Ching-yuan Chen’s video “Staggering Matter” (2011), which presents a white man and woman interrogating and deriding an Asian man who reflects on his own complicated past. Tsai introduces the work as an allusion to Korea and Taiwan being “pawns in a political game between USA, China, Japan and Russia from the period of Japanese colonialism to the neoliberalism of today.”

The striking resemblance between Chung and Tsao’s works demonstrates how Korea and Taiwan struggle with similar concerns - both artists submitted works that express their confusion over how to feel about remnants of Japanese colonial rule.

Tsao’s “Becoming / Taiwaness” (2018) is a collection of photographs of Taiwan’s Martyrs’ Shrines, now popular tourist destinations, that were created on former sites of Japanese Shinto shrines established during the colonial era. The artist juxtaposes them with older images of the shrines, exploring their contemporary significance and relationship with the Taiwanese people.

Chung’s “A Sketch for a Foundation” (2019) is a very personal expression of the artist’s confused emotions about her fond childhood memory of visiting the National Museum of Korea when it was housed in the former Japanese General Government Building before it was demolished in 1995. Chung’s project includes a video showing news coverage of the demolition, etchings of the museum’s interior and projection of an ornamental symbol featured in the museum. The remaining works take a closer look at figures who lived and stories that were produced during colonial rule. Jun’s “DidaTeleportMurdertheClosedCircuit” (2018) takes inspiration from early poetry by Yi Sang, a thinker who wrote about the modernity of Seoul in the 1930s.

The Alternative Space LOOP exhibition is the first of Tsai’s three-part curatorial series featuring Taiwan and Korea. The first chapter was sponsored by the Arts Council Korea, National Culture and Art Foundation and Department of Cultural Affairs, Taipei City Government. The second chapter, set to be held in a different gallery, will explore modern protests and social movements in Taiwan and Korea.