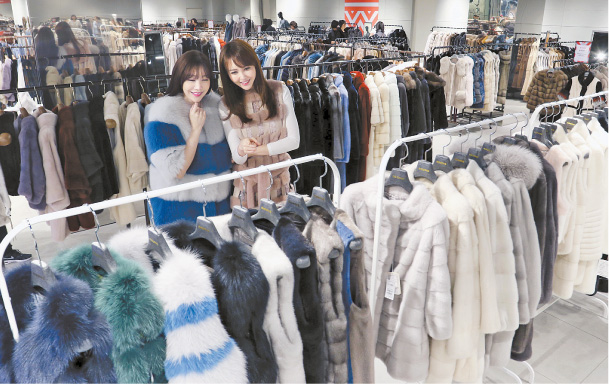 Summer may not be the best time of year to strut around town in your big fur coat, but it turns out it is the best time to buy it.

As wealthy customers look for opportunities to buy expensive fur clothes at cheaper prices, department stores are seeing their sales spike, even on the hottest days of the year.

Department stores usually categorize their customers as VIPs when they spend between 8 million won and 40 million won per year.

While VIP customers usually take up around 33 to 35 percent of sales of fur clothes from these department stores, in the summer, that rises to be between 42 percent and 60 percent.

These VIP customers choose to buy fur out of season because prices can fall by as much as 20 to 30 percent during the summer.

One such VIP customer is Choi Joo-eun, who walked into a department store in Seocho District, southern Seoul, last Friday. Even though the temperature reached 35 degrees Celsius (95 degrees Fahrenheit) that afternoon, she made the visit to preorder a sable vest for the winter.

“I was already looking for a fur vest to wear later in the year, but buying it in summer is a lot cheaper,” Choi said.

The fur vest Choi was eyeing usually costs 94.4 million won ($78,000), and even with the VIP benefits offered from the department store, the price can only fall as far as 37.8 million won. However, as the summer discount kicked in, Choi saved millions of won and bought the vest for just 17.64 million won.

Lotte Department Store started first. Since Monday, it has been cutting its fur prices by up to 40 percent at four of its branches in Seoul.

Shinsegae Department Store followed, starting Thursday, with its so-called “Shinsegae Sable Week” at two of its branches in Seoul and Busan that provide up to 70 percent discounts on its sable clothes. The same event began in a branch in Daegu that kicks off today.

“Fur prices are expected to rise again starting next year, so now is probably the best time to buy.”

Hyundai Department Store has also joined the trend, as it is holding a 40 percent discount event for Jindo fur items - a brand that is not related to the species of dog - at three of its branches in Seoul until Aug. 25. A spokesperson for the department store said it is also selling a limited number of fur jackets for 1.9 million won and fur coats for 1.5 million won.

But the department stores are also engaging in intensive discount promotions as early sales numbers for their fur items have failed to meet expectations. Sales for major fur brands in January and February fell between 20 to 40 percent compared to the same period a year earlier due to the struggling local economy and a general fall in sales.

The fur-free movement has also taken a toll. After London Fashion Week, one of the four major fashion shows in the world, dropped fur clothes from its annual event last year, public sentiment toward fur clothes, which used to be a symbol of wealth, has significantly weakened.

Celebrities have also joined the anti-fur movement. Actress Rhee Min-jung recently shared a photo of her wearing fake fur clothes on her social media account in February and called on her fans to join the movement.

Experts believe local department stores will have to continue their aggressive discount campaigns as the public no longer has favorable views of wearing fur clothes.

“Not only regular retail brands like Zara and H&M but also luxury brands like Prada, Michael Kors and Gucci have joined the fur-free movement and increased the popularity of so-called ‘eco fur,’” said Lee Hyung-joo, head of the Animal Welfare Awareness, Research and Education Foundation.

“Even if fur prices fall, if this kind of sentiment expands, fur sales will continue to drop.”