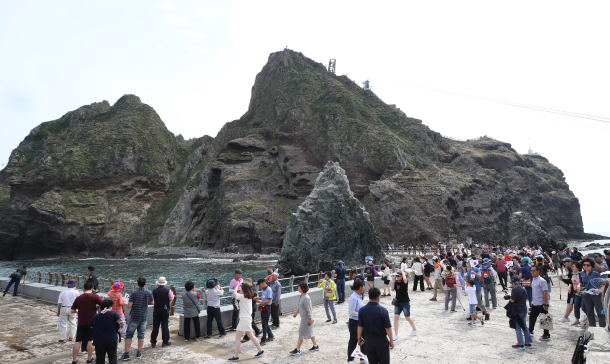 Tourists land on Dokdo, Korea’s easternmost islets, on Monday. Ferries had not been permitted to come alongside the pier on the islets from Aug. 14 until Aug. 18 due to high waves caused by a passing typhoon. [YONHAP]

South Korea is still reviewing the timing and scale of semiannual maritime defense drills to be held on and around its easternmost islets of Dokdo, the Defense Ministry said Monday.

This year’s drills have been pushed back amid an escalating trade row with Japan stemming from differences over wartime forced labor. Korea usually stages the drills in June and December.

Japan, which also claims Dokdo, has protested the drills.

“We are reviewing the schedule and other details while taking various factors into consideration,” Defense Ministry spokesperson Choi Hyun-soo told a regular briefing, adding that such specifics “are subject to change each time in accordance with related situations.”

Earlier this month, President Moon Jae-in’s national security advisor, Chung Eui-yong, said during a parliamentary session that the drills would be staged on a larger scale compared with previous ones, but he didn’t elaborate.

Some have speculated that the drills could be pushed back until after this week, as the foreign ministers of Korea and Japan could hold one-on-one talks when they gather in Beijing this week for trilateral foreign ministers’ talks with their Chinese counterpart.

“There have not yet been specific instructions related to the drills, though we’ve been preparing for them just as we’ve done over the past several years,” a military source said.

Korea has maintained effective control of Dokdo with a small police detachment since the islets’ liberation from Japanese colonial rule in 1945.

Japan has persistently laid claim to Dokdo, drawing strong condemnations from the Seoul government. Korea launched the Dokdo drills in 1986. Last year, the drills took place for two days in both June and December.