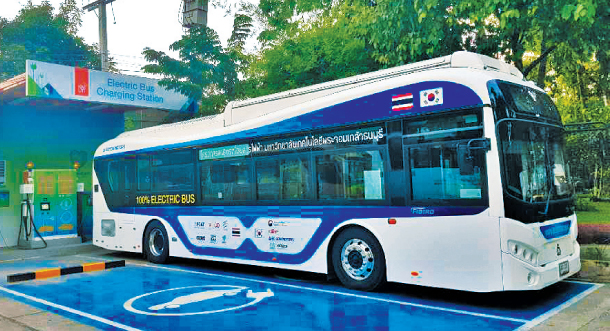 An electric bus is parked at King Mongkut’s University of Technology Thonburi in Bangkok on Monday. [PARK EUN-JEE]

BANGKOK, Thailand - Nestled in a parking space at King Mongkut’s University of Technology Thonburi in Bangkok, a white electric bus is being recharged.

On the side of the bus, the flags of Korea and Thailand are painted, alongside the words “100 percent electric bus.”

The battery-powered bus represents a growing area of cooperation between Korea and Thailand as the Southeast Asian country looks to lure more foreign investment with the aim of becoming an industrial hub in the region.

The electric bus, manufactured by Edison Motors, a Korean electric bus maker, is part of an ongoing pilot test for the Thai government’s potential adoption of the eco-friendly alternative to diesel transit bus.

“Edison - together with the Thai government and the university - is testing whether its bus is suitable for the very hot climate and traffic congestion found in Bangkok,” said Kitchanon Ruangjirakit, a lecturer in the department of mechanical engineering at King Mongkut’s University of Technology Thonburi.

“We are jointly working on traffic data collection, standards, energy consumption and battery capacity with Edison’s electric bus,” he said as he gave a tour of the bus and charging station to a group of Korean reporters.

The technology research university is one of 11 participants in the electric bus trial that will run through this year. Other partners include the Korean Ministry of Trade, Industry and Energy, Korean Energy Technology Evaluation and Planning, Bangkok Mass Transit Authority and the Electricity Generating Authority of Thailand, a state-run electricity provider.

Bangkok’s transit regulator will later open the official bidding process to run electric buses as mass transit buses in the city, and Edison will likely throw its hat into the competition, according to the lecturer.

“They have the advantage because they know the conditions of the bus,” said Yossapong Laoonual, a mechanical engineering professor at the university.

Beyond these demonstrations, Thailand has embarked on bigger projects and introduced policies intended to bring in foreign investment.

The cornerstone of the move is an initiative dubbed the Eastern Economic Corridor (EEC). Introduced in 2018, the plan encompasses infrastructure development to create industrial clusters for high potential, tech-focused sectors including in the automotive, bio, medical and digital industries.

Of the 12 targeted businesses, Thailand already has a firm ground in the automotive sector and hopes to move into incorporating more advanced technologies through the development plan.

“Thailand is the biggest exporter of cars in the Association of Southeast Asian Nations. We have more than 1,000 local parts suppliers. We are ready for the next step of the automotive industry,” said Narit Therdsteerasukdi, deputy secretary-general of Thailand Board of Investment.

“We are also trying hard to attract Korean battery makers, LG Chem and Samsung SDI, because we’d like to build a whole supply chain of electric vehicles [EVs] in Thailand. Not only car assembly, but we also want to build key parts of EVs like batteries and motors,” he said.

While big corporations from China, Germany and Russia have expressed their interest in investing in the EEC initiative, Korean companies are not as enthusiastic.

“Unfortunately, there are no Korean companies [engaging in the investment stage of the project],” said Hiran Rujirawirote, senior assistant director at the international affairs division at the EEC Office.

But he expects upcoming events - including President Moon Jae-in’s planned visit to Thailand next month - to serve as a catalyst for more interest from Korea.